The funeral service for Herbert Manville Beckmann, of New Richland, will be 1 p.m. Saturday at St. Peter Evangelical Lutheran Church, New Richland. The Rev. Scott Williams will officiate. Interment will be in St. Peter Cemetery. Visitation will be from 4 to 8 p.m. Friday at Friedrich Funeral Service, New Richland, and one hour before the service at the church. Military honors will be accorded. 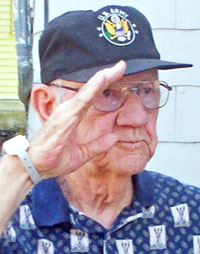 Herbert died Tuesday, Nov. 2, 2010 at the Mapleton Community Home, Mapleton. Prior to the flood of Sept. 23 he was a resident of the New Richland Care Center. He was 87 years old.

Herbert was born May 31, 1923, in Faribault County, to Eli and Meta (Quade) Beckmann. He attended Walnut Lake Township School and the Freeborn, Minnesota school for two years. Herbert has resided near Freeborn, Wells and New Richland. He married Doris M. Fredrickson on Feb. 24, 1945. Herbert was a WW II veteran of the United States Army. He was a member of St. Peter Evangelical Lutheran Church. Herbert had worked for the Matawan Elevator, and managed the American Legion of New Richland for 25 years of which he helped build. Herbert was a lifetime member of the New Richland American Legion and the Waseca VFW. He enjoyed gardening, fishing, watching the Twins and Vikings and playing cards. Herbert especially enjoyed being with his family.

Herbert is preceded in death by his parents: Eli and Meta Beckmann; four sisters and five brothers.