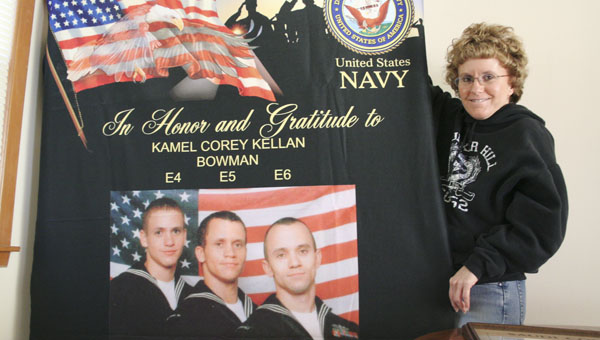 Laurie Neff of Albert Lea takes advantage of the little time she gets with her three sons these days.

Family gatherings are few and far between because all three are currently serving active military duty in the Navy: Kellan Bowman, 29, is an officer on the USS Hue City in Jacksonville, Fla.; Corey Bowman, 26, is a recruiter in Cookeville, Tenn.; and Kamel Bowman, 23, has a security position in Pensacola, Fla.

“It’s not very often anymore we can all get together,” she said. “But we try for once a year.” 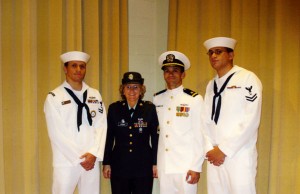 Laurie Neff, retired from the U.S. Army, stands proud with her three sons, from left, Corey, Kellan and Kamel Bowman, who are all currently active in the U.S. Navy. -- Photo submitted

She retired from the U.S. Army in 1995 when Kellan was entering his freshman year in high school.

“Toward the end of my career, I was really missing out on parts of their growing up,” she said. “I wanted to move into one place the boys could call home.”

For Neff, home was growing up in Albert Lea. She graduated from Albert Lea High School in 1978, the daughter of Daniel Hanson, a retired Marine.

She had originally planned to attend college in Mankato to become a dental assistant. A meeting with an Army recruiter changed those plans, and Neff entered basic training at Fort Jackson, S.C. in August 1979.

After her schooling was complete, she was sent to Darmstadt, Germany, where she served as an ammunition specialist doing administrative work.

Neff returned to the states, becoming a Standard Installation and Division Personnel Reporting System (SIDPERS) clerk at Fort Carson, Colo., before she was transferred to Baumholder, Germany.

Neff was then sent to Fort Campbell, Ky., where she served as an administrative supervisor and attended air assault school.

She was deployed to Saudi Arabia in August 1990 and served in the Persian Gulf War and the lead-up to it until August 1991.

“The boys were little, and we only talked one time during my deployment,” Neff said. “We wrote letters and my youngest, Kamel, drew pictures for me.” 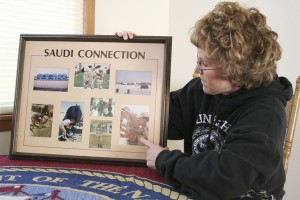 Laurie Neff shows off a collage of photos taken in Saudi Arabia when she served in the U.S. Army during Desert Shield/Desert Storm. -- Michelle Haacke/Albert Lea Tribune

“I kept every single one of those letters,” she continued. “They’re just so precious to me.”

Kellan was about 10 years old when his mom was deployed. He and his brothers lived with his grandparents here in Albert Lea.

“It was hard, especially for my brothers, because they didn’t understand as much of what was going on. Especially Kamel,” said Kellan.

“People don’t see it now, but my mom is one of the toughest individuals I’ve ever met,” he added. “She was in the military, a single mom, she was deployed for a year, yet she still raised us well. I’m always proud to say I’m a product of what my mom instilled into me.”

After her deployment, Neff’s military career took her back to Germany where she served as a protocol officer and then to Fort Monmouth, N.J., before retiring in 1995.

Neff said it was simply time to settle down.

“There were some years we moved around so much, the boys would be in three different schools in one year,” she said.

She moved her children back to Albert Lea because she liked the school system and her family was here.

“Moving around so much, you always had to make new friends, which was always a challenge,” Kellan said. “But even at that point, I don’t think I really understood just being in one spot.”

Kellan has been living in Jacksonville, Fla., now since 2003. It’s the longest he’s ever lived anywhere.

“It’s just weird to stay in one place this long,” he said. “I think it stems from moving around so much early in my life.”

Neff credited her family for their support during all of the moving around and her deployment.

“Sometimes it’s tough, but you have to have a strong family,” she said. “It makes your job easier to do knowing you’ve got the support back home.”

Support is something she cannot stress enough and strives to pass along to her sons.

“Two of them have been deployed, and I told them, ‘Remember, we’re behind you, we’re there for you, you do your very best,’” she said.

Neff sees her children’s deployment from a different perspective than many moms, because of her own deployment, although she’s not sure that makes it any easier.

“It’s harder being on the other side, because I know what they’re going through,” she said.

The communications, however, she said are easier now. Thanks to Facebook and e-mail, Neff can keep in touch with her boys much more regularly than 20 years ago during her deployment.

“We would write letters, and I would ask them a question, but by the time I got the next letter with the answer, it was hard to remember what the question was,” Neff smiled.

“It was different, but almost more exciting to get that letter in the mail. We wrote letters almost every day,” Kellan recalled.

Being a father now, Kellan has experienced this same loss from his wife and son during a recent deployment, too.

“I get e-mails every day, which makes it easier for communicating but still doesn’t make it easy to be away from them,” he said. “I think it would be really difficult with just letters, especially when you might not get a letter every day or every week.”

These days, Neff also offers up her support by giving back to the community. She is a member of the American Legion Post 56 in Albert Lea, VFW Post 447 of Albert Lea, the VFW Honor Guard and the Non-Commissioned Officers Association.

She is also a Red Cross volunteer, and once a week, she’s on call to help get messages of urgency from local families to their family members overseas.

Neff is also proud of her sons and enjoys visiting their bases.

“Going onto a base brings back that feeling,” she said. “It’s kind of like a big family. You just have a connection, a bond.”

Kellan said there was never any question that he would join the military, following in the footsteps of his grandfather and mother. He thinks it’s the right thing to do.

“My mom always reminded us then and now that people who serve our country today make sacrifices, not just by giving their lives,” he said. “There are a lot of little sacrifices the people don’t think about — moving, being away from your family, deployment, you’re always held up to a higher standard. My mom did that for me at a younger age.”