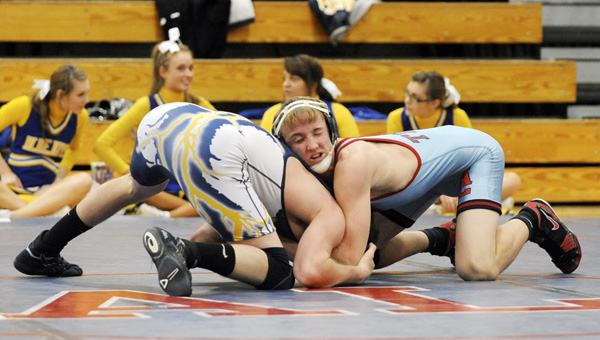 Albert Lea’s Cory Hansen wrestles a Waseca opponent earlier this season at Albert Lea High School. Hansen will be a key member of the Tigers wrestling team trying to improve on last season’s 23rd finish at the Clash. -- Andrew Dyrdal

After placing ninth in the Minnesota Christmas Tournament on Dec. 17-18 in Rochester, the Tigers finished 11th in the 64-team Rumble on the Red Championships on Wednesday and Thursday in Fargo, N.D.

On Friday the wrestlers embark on their biggest test of the season, the Clash National High School Wrestling Duals in Rochester, a 32-team tournament featuring the toughest, most talented teams from the midwest.

But the wrestlers aren’t the only Albert Lea athletes looking dead on at their most challenging stretch of schedule.

The pressure will be on the Tigers to knock off Lourdes and put themselves into the driver’s seat for a No. 1 seed in Section 1A.

After playing Lourdes Tuesday, the Tigers matchup against Virginia/Mt. Iron-Buhl and Hibbing/Chisolm, the No. 6- and 7-ranked teams in Class A, respectively at City Arena.

After the smoke clears from the two-day dual with teams from the Iron Range, the Tigers travel to Rochester Century (5-4) at 7:30 p.m. on Jan. 11 to play the only Big Nine team that has beaten them so far this season.

The Panthers are undefeated in the Big Nine and coming off a consolation championship in the Rochester Class AA Tournament.

The wrestlers face a different type of monster in the Clash, where they’ll be wrestling up to three team duals a day for two days.

The No. 6-ranked Tigers open in Bracket ‘C’ against Carl Sandburg, the No. 3-ranked team in Illinois’ Class AAA.

Win or lose, the Tigers will play either Wisconsin Rapids or Broomfield, Colo. Both teams are ranked No. 1 in their respective states.

Other notable Class AAA Minnesota teams in the Clash are No. 3 Owatonna, No. 1 Apple Valley, No. 4 Hastings, No. 7 Forest Lake and No. 2 St. Michael-Albertville.

Last season the Tigers placed 23 at the Clash. Apple Valley is the defending champion.