Tigers fall to Beacons in OT 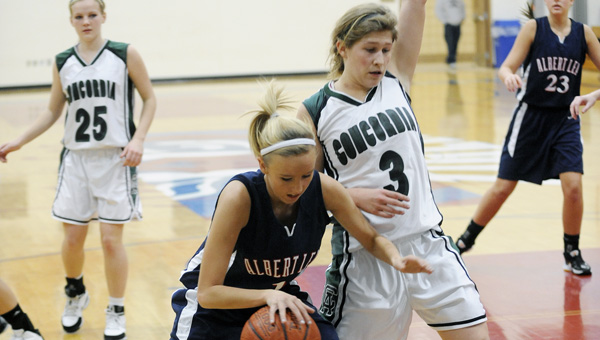 The Albert Lea girls’ basketball held a lead for most of the game Monday but fell 75-72 in overtime to the Concordia Academy-Roseville Beacons in the first round of the Tiger Classic.

The Tigers (1-7) led 58-55 with four minutes and 41 seconds left in the game after Skyler Anderson hit two free throws.

The Beacons (5-2) answered with a free throw of their own, and on the following possession Jacki Smith scored a layup to pull Concordia Academy ahead 59-58.

The Beacons went on to score four more unanswered points a built their biggest lead of regulation 63-58 with just over a minute left in the game.

Taylor Friehl hit one of her five 3-pointers to pull within two points and the Beacons’ Emily Neuman missed two free throws to keep the Tigers in the game.

Friehl connected on two more free throws with 22.3 seconds left to tie the game at 63-63 and after a jump ball was called, the Beacons’ Smith missed a last-second shot off an inbound pass.

The Beacons opened overtime with seven unanswered points and took a 70-63 lead.

Friehl hit two 3-pointers in the game’s final 10 seconds, including one at the buzzer, but the Tigers overcome the early deficit.

“It was definitely an improvement over the (Simley) game,” Tigers head coach Sean Gillam said. “We made a lot of little dumb mistakes, something every team goes through.”