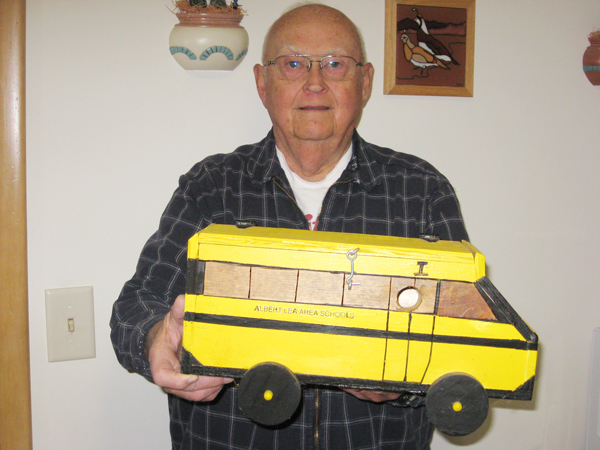 Les Anderson’s hobby is woodworking. Partial proof of this can be seen with the seasonal lawn decorations in his front yard on Harmony Avenue. His latest creation is this birdhouse based on a school bus. -- Ed Shannon/Albert Lea Tribune

Ask Les Anderson about his most memorable assignment as a bus driver and his reply will likely be based on a tour with a Chinese orchestra back in 1997. 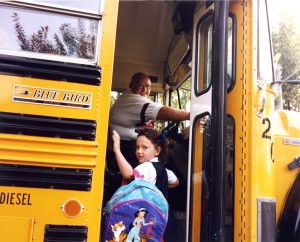 This photo was taken about 15 years ago on Ridge Road in Shoreland Heights. It shows Bridget Regan getting on the Bluebird bus driven by Les Anderson on her first day of school. -- Photo courtesy Les Anderson

During those 25 days he drove one of two charter buses that transported the National Traditional Orchestra of China on a concert tour. Even now he can recall the itinerary which started in New York City.

Other than a concert in New York City’s prestigious Carnegie Hall, most of the Chinese orchestra’s concerts were at universities and colleges in Massachusetts, Pennsylvania, Michigan, Illinois, Kentucky, Tennessee, West Virginia and several other states.

“The closest I got to home was when they were at the University of Iowa (in Iowa City),” he explained.

After leaving this orchestra at the Pittsburgh Airport, Anderson returned to Albert Lea

The following year he drove a chartered bus for the first of three trips with Opera A La Carte of Los Angeles, Calif. He said the three trips totaled 21 days. The itinerary for one of these trips was meeting the opera performers at a Chicago airport, then going on a tour that included Mason City, Iowa, Nebraska, Overland Park, Kan., Oklahoma, Texas and ended at Corpus Christi. 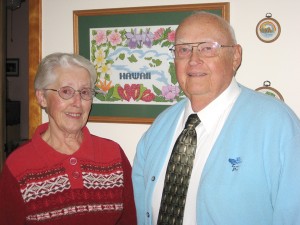 Lois and Les Anderson of Albert Lea have several souvenir items in their home based on past travel destinations. One is a cross stitch creation based on a pattern she acquired in Hawaii. -- Ed Shannon/Albert Lea Tribune

He said the operas this group presented were the “Mikado,” plus one or two more of the Gilbert and Sullivan classics.

“I got to liking operas, they’re very interesting,” he commented.

In 2001 he became one of the drivers for the American tour of the Russian National Orchestra.

“The leader (conductor) could speak English and that really helped,” he said.

Anderson recalls that the Russians had metal suitcases that were very heavy. He added that the itinerary for this group included a pick up in Chicago, a concert at Iowa State University in Ames and several stops in Nebraska.

This veteran bus driver grew up in Bricelyn. He served in the U.S. Army during 1954-55 with overseas duty on Guam Island. He married Lois Katzung of Kiester in 1957 and they soon moved to Albert Lea and within several years were settled into their present home on Harmony Avenue.

He said his first local employment was with Minnesota Transit, then at the Motor Supply firm. Through the years he’s worked both full-time and part-time for the Nelson Bus firm out of Clarks Grove, Matson Truck Lines, Owatonna Bus, North Iowa Bus and Albert Lea Bus Co. And for 15 years he was both a regular and substitute school bus driver in the Albert Lea area. 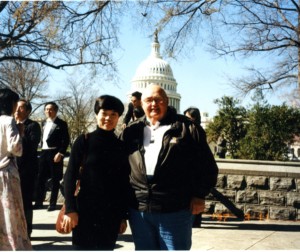 During 1997 Les Anderson of Albert Lea was one of the charter bus drivers for the American concert tour of the National Traditional Orchestra of China. One of their stops was in Washington, D.C. In the background is the nation’s capitol building, and next to Anderson is Tsai Lien, the translator for the Chinese musical group. -- Submitted photo

One incident he recalls from this era involved two young girls in the rural area. On a brutally cold morning he stopped to pick up the girls who were usually waiting outside a small roadside shelter at the end of the driveway their father had built for them. On this particular morning they weren’t waiting. He got out of the bus and went to the shelter. The door was stuck and the two girls were inside crying. Their parents had left for work earlier, and he was able to get the door open and took them to school.

From 1994 to last year he also delivered motor homes for Winnebago of Forest City, Iowa. Seven or eight of those one-way trips were to Anchorage, Alaska.

“On one of the trips up through Canada it was wintertime and cold here in Albert Lea and 40 degrees above zero up in Anchorage,” he commented.

After those trips to Alaska he had to take an airliner back to Minnesota. For some of the trips to the eastern parts of the nation to deliver motor homes, the return trip was based on bringing back used cars for the Trading Post of Gordonsville.

“My wife and I do a lot of traveling,” he explains. “We’re a traveling family.”

Lois worked for 20 years as a tour guide or escort for 4 Seasons Travel of Albert Lea. As a result, he would go along on some of her trips to Hawaii and other destinations. In fact, he was also the driver on some of her bus tours to destinations like Pella, Iowa, and Branson, Mo. On their own, the couple have made trips to Germany and Australia.

The couple has a son, Doug of Robbinsdale; daughter, Nancy Lahs of Albert Lea; and a granddaughter, Tara Madson of Albert Lea. A son, Bradley, died in 1998 and is buried in Arizona.

“I can no longer drive because I’m diabetic and take insulin,” he explains.,

At the present time he works part-time in the morning and afternoon for Albert Lea Bus Co. where he does monitoring and odd jobs.

An era of groceries