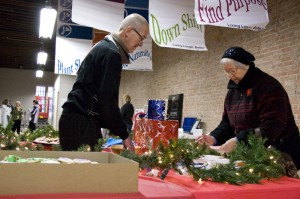 Albert Lean Lenore Fries talks with Vitality Leadership Team Chairman Randy Kehr Thursday evening during the soft opening of the National Vitality Center in downtown Albert Lea. People got the chance to see the progress that's been made at getting the space ready for the center. -- Sarah Stultz/Albert Lea Tribune

After hundreds of hours of work behind the scenes, the National Vitality Center was opened to the public Thursday to give people the opportunity to see that the project is still moving forward, and it’s expected to be finished soon.

The National Vitality Center, 211 S. Broadway Ave., was initiated at the conclusion of the pilot AARP/Blue Zones Vitality Project in October 2009. It is being set up as a place to continue the efforts of the project — which has gained attention across the nation and even the world — and is designed to encourage residents to live longer, healthier lives.

Community Development Director Bob Graham, who is also part of the Vitality Leadership Team, said he hopes to have a grand opening at the center in February, though it may actually be finished before then.

There’s also some new equipment put in, and a large window has been installed on the back wall, among other renovations.

“We say thank you to the many hundreds of hours that have been put in,” Graham said. 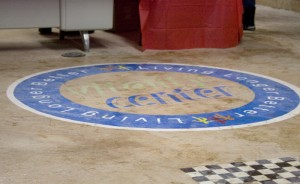 The new National Vitality Center logo greets people as they walk into the center Thursday.

Then, of course, there’s always volunteer labor needed as well.

When completed, the building will be open to the public on a daily basis, primarily through the use of volunteer ambassadors.

Activities taking place at the center will be consistent with the nine elements of longevity seen in the Blue Zones. Not only will it provide meeting space for local initiatives, but it will also be the reception center for regional and national programs on vitality.

Spaces will be provided for computers and WiFi for people to research health and vitality, and T-shirts and other products consistent with the Blue Zones will be for sale.

Ultimately, the center will “become a long-term ‘think-tank,’ research center and facilitation center toward local, regional and national vitality initiatives and the development of concepts for national health and vitality policy, according to the National Vitality Center brochure.

“If it wasn’t for the donations of the people, this wouldn’t be here,” said architect Pat Waddick who has worked closely with the city on several projects.

To find out about making a donation to the National Vitality Center or to volunteer, call 377-4316.