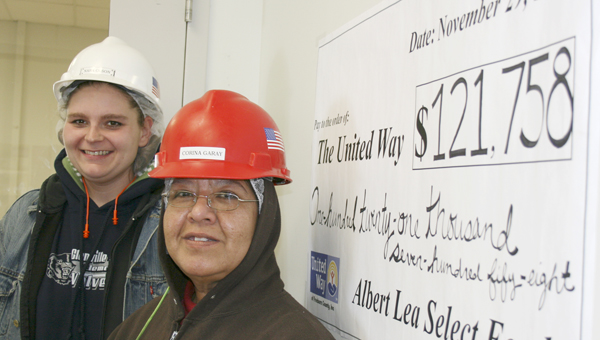 Albert Lea Select Foods employees know what it’s like to give.

With 97 percent participation in the company’s United Way campaign, the employees raised more than $121,000 this year for Freeborn County United Way agencies.

For these employees, giving has become a way of life.

“We talk to our employees from day one,” Newton said. “After we talk about safety, we talk about United Way and the importance of giving. 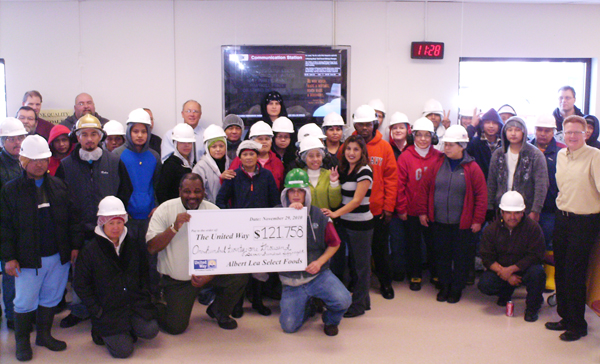 Albert Lea Select Foods employees raised $121,758 during their 2010 United Way Campaign drive. They are commited to helping others in the community and to providing a positive work environment for employees and their families and respect for the greater community. -- Submitted photo

“We’re proud to be a part of the community and we will do what we can to make it successful,” he added. “We want people to know we support our community.”

Newton said each year the employees set a goal to try and do better than the year before.

And that’s exactly what has happened.

He noted the employees talk about the United Way all year long, not just once a year during the campaign. They sit down with each other and share their stories of themselves or other people they know who have benefited from a United Way agency.

But ultimately, it’s up to each individual employee to choose to participate — because after all, it is their money, Newton said The company also has a “heart club” for all employees who give $5 a week. More than 70 percent out of about 500 employees achieved this status during this campaign.

They also try to make the campaign fun and even bring in prizes.

Select Foods President Kelly Wadding said the employees have gained pride and confidence in their contributions. He noted the United Way was the best vehicle to help as many people as possible in the community.

“It’s all about a culture — what we do to help not only each other, but the community,” Wadding said.

Select Foods General Manager Nate Jansen said the amount of donations the employees make speaks volumes to the caliber of the employees.

One employee, Nara Olson, who has worked at Select Foods for a little over a year, said she has always liked to give.

She said she wants to teach her son from an early age that it’s good to donate to the less fortunate and to help others when she can.

“There’s a lot of people out there who don’t have it as good as we do,” she said.

Another employee, Corina Flores, said she was impressed at how much the company’s employees raised.

“This year, there’s been a lot of caring,” Flores said.

Select Foods typically brings in the largest corporate donation to the United Way.

United Way Director Ann Austin said she was impressed and grateful with the donations. She said it shows that these employees have established a culture of giving.