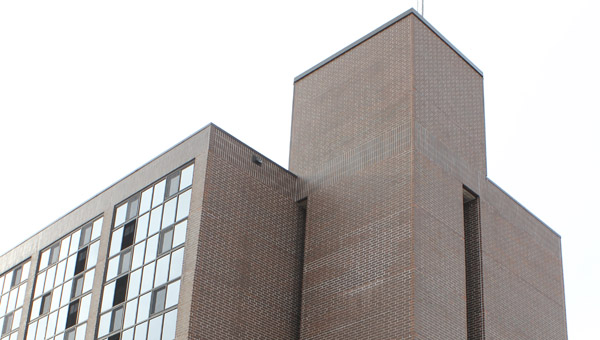 The largest housing complex owned and operated by the Albert Lea Housing and Redevelopment Authority, the Shady Oaks high-rise is the tallest building in Albert Lea. 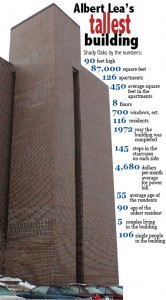 Albert Lea Housing and Redevelopment Authority Executive Director Jon Ford said when the building first opened, it was open for general occupancy, subject to income guidelines. However, in 2002 occupancy requirements changed to include only people age 50 and older or people who are disabled.

In August, the occupancy guidelines again changed, this time to go back to general occupancy. Ford said the apartments are still income-based, but the building can house some people over-income if needed.

The building provides quality units of affordable housing that might not otherwise be available, he said.

Rent is paid based upon a tenant’s adjusted monthly income, which averages to be $289 per month. Subsidy is provided by the U.S. Department of Housing and Urban Development.

Ford said the occupancy requirements changed in 2002 to change the marketing approach of the building, and they were changed back in 2010 for the same reasons. 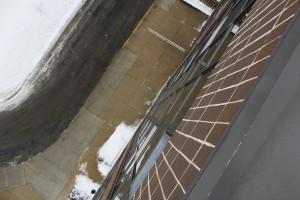 The view straight down 90 feet as seen from the roof of Shady Oaks. -- Tim Engstrom/Albert Lea Tribune

He noted the building is still transitioning to the change.

“We are seeing a bit of a change in the chemistry of the building, but we have also seen a growth in demand for the units,” Ford said.

In the past five years, there have been improvements to modernize the building.

Ford said there has been a lot of landscaping to make the building more appealing, and also to solve erosion issues, new outbuildings were built in 2007 and 2008, three ground floor units were taken out of the rental mix and to be used for meeting space and a new air handling system was added in 2010.

The HRA has 185 units: 176 public housing units, one market rate unit and eight units of rural development. These units are in 42 dwelling units. 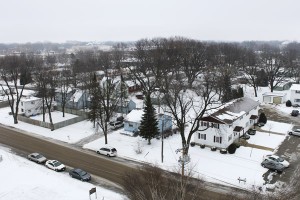 A view from the roof of Shady Oaks shows the neighborhood to the building’s northwest on Friday morning. -- Tim Engstrom/Albert Lea Tribune