Memorial services for Carol Ann Bye of Kiester will be held at 10:30 a.m. Friday at Our Savior’s Lutheran Church in Kiester. Visitation will be held from 4 to 7 p.m. Thursday at the Bonnerup Funeral Service, and one hour prior to the service at the church. Interment will be held at a later date in the Zion Lutheran Cemetery in Kiester. 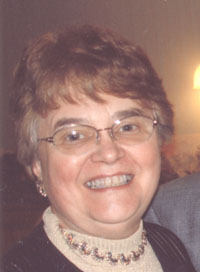 Carol died Monday evening at the Good Samaritan Center in Albert Lea. She was 71 years of age.

Carol was born April 17, 1939, in Buffalo Center, Iowa, the daughter of Howard and Elvina (Trytten) Christianson. She was a graduate of Albert Lea High School in 1957. Carol was united in marriage to James E. Bye on Nov. 3, 1957, at the Grace Lutheran Church in Albert Lea. After her marriage they moved to River Falls, Wis., where James went to school and Carol worked at the First National Bank. They then moved to the Kiester area where they operated a dairy farm for more than 40 years.

Carol was baptized and confirmed at the Grace Lutheran Church in Albert Lea. While living in the Kiester area, she became a member of the Our Savior’s Lutheran Church where she was an officer and active member of the WELCA, and a Sunday School Teacher. Carol worked early in life as a legal secretary and tax preparer, helped in the family restaurant in Albert Lea and for eight years with KATE radio. Both Carol and James were active members in the National Farmers Organization and the Freeborn County DFL. She enjoyed traveling, fishing, reading and her bowling league. Spending time cooking, baking and coffee with neighbors and friends were very important. She loved her job as a tour bus chaperone, spending time with her family and grandchildren and her overwhelming abundance of friends and neighbors.

Carol was preceded in death by her father, Howard, and father-in-law, Orlando Bye.

Memorials are preferred to the Crossroads Community Hospice or Our Savior’s Lutheran Church in Kiester.