Funeral service will be held at 10:30 a.m. on Thursday at Trinity Lutheran Church in rural Thompson, Iowa. Burial will be in the Trinity Lutheran Cemetery. Visitation will be from 4 to 7 p.m. today at Petersen Lund Funeral Home 505 N Clark St in Forest City and will continue an hour prior to service at the church. 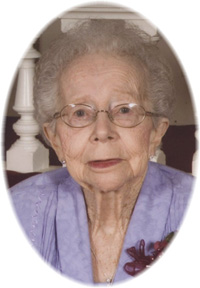 Carol Deloris (Johnson) Christenson, the daughter of Carlton and Adina (Hefte) Johnson, was born Jan. 29, 1921, in Belmond Township, Wright County, Iowa. She was baptized at St. Olaf Lutheran Church, Belmond, on March 13, 1921, and was confirmed at Kanawha Lutheran Church, Kanawha on Aug. 27, 1935. She attended Belmond Township No. 2 School through the eighth grade and worked for the Tyrell family in Belmond. Carol was 16 when she went on her first date with a young man named Earl Christenson. They were introduced by Earl’s brother, Lloyd. Carol and Earl dated for three years and then were engaged for one year.

On Sept. 14, 1941, she was united in marriage to Earl Albert Christenson at the Congregational Church in Belmond. Earl started farming in 1942 in the Kanawha and Clarion areas. In 1952 they moved to a farm near Bricelyn where they farmed until he retired in 1983. Carol enjoyed raising chickens which she butchered and sold and had a huge strawberry bed along with all the flower beds. Carol helped with the farming and during the summer she also worked in the sweet corn factory in Bricelyn.

In 1993, they moved to Forest City, Iowa, to enjoy their retirement years. Earl and Carol celebrated their 60th wedding anniversary on Sept. 14, 2001. Carol enjoyed spending time with her family, golfing, playing cards, bowling and dancing, whether it be square dancing, or polkas and waltzes. She crocheted afghans for all of her children and grandchildren, and also embroidered a set of dish towels for each of them. She was an active member of Trinity Lutheran Church, rural Thompson, Iowa, where she was a member of the Altar Guild and WELCA, and her circle. In 1995 she transferred her membership to Immanuel Lutheran Church in Forest City where she was active in circle. She was also an active member of the Kum Along Club in Forest City. Carol entered the Lake Mills Care Center on May 1, 2009.

She was preceded in death by her husband, Earl on May 14, 2002; three sisters; three brothers (two in infancy); son-in-law, Gary Anderson; and great-grandson, Zackery.