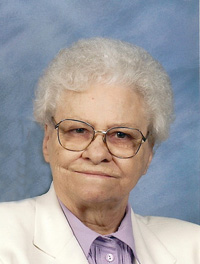 Charlotte was born March 14, 1928, in Waseca, to August and Virginia (Simpson) Billing. In 1934 Charlotte’s family moved from New Richland to Hillsboro, Ore. As a teenager during World War II, Charlotte worked at the Portland Shipyard which built Liberty Ships for the war effort (she swept the decks). Charlotte graduated from Hillsboro High School in Hillsboro, Ore., in 1947. During her senior year she won the Scholastic Art and Writing Awards for her art work and was given the first gold key at Hillsboro High. Charlotte was active in the band and was the student director of the spring band concert. Following graduation Charlotte worked as an elevator operator at the Meyer and Frank’s department store in Portland, Ore.

On Dec. 22, 1950, she married Ernest L. Peterson at Saint Peter’s Lutheran Church in Blooming, Ore., and has made her home in Longmont since their marriage where she and Ernest raised four children. Charlotte was a member of Bethlehem Lutheran Church for 60 years where she was active in Bethlehem WELCA and the Deborah Circle. She did the artwork and layout for two cookbooks at Bethlehem Lutheran, which raised money to build the picnic shelter at the church called Bethlehem’s Stable. She also completed the five-year bible study with Bible Study Fellowship in Longmont.

Charlotte was a gifted artist and was an international China painter teacher; her China painting won numerous blue ribbons at the Boulder County Fair. Other mediums she enjoyed included Oil, Tole and Rosemaling painting. Charlotte was an excellent seamstress, and loved doing arts and crafts. She was an avid cook and enjoyed cooking for family and friends. She enjoyed bowling.

She was preceded in death by her parents and her husband, Ernest L. Peterson, on April 13, 2008.

Visitation will be 5 to 7 p.m. Thursday at the Ahlberg Funeral Chapel with family present to greet friends. Funeral services will be 1 p.m. Friday at Bethlehem Lutheran Church, 1000 15th Ave. in Longmont, Colo. Interment at Foothills Gardens of Memory. Memorial contributions to Bethlehem Lutheran Church or the Longmont Humane Society can be sent in care of Ahlberg Funeral Chapel, 326 Terry Street Longmont, CO 80501. Visit www.ahlbergfuneralchapel.com to share condolences with the family.