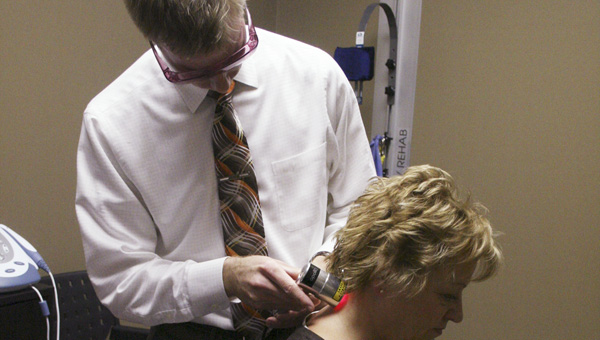 Joan Anderson, getting cold laser therapy from chiropractor Matt Tubbs, said since starting treatments over a month ago, her head and back aches have subsided. -- Michelle Haacke/Albert Lea Tribune

The next generation of therapy has arrived in Albert Lea. Cold lasers are growing in popularity as a means of therapy.

“It’s not the kind of laser that people are typically use to seeing on James Bond movies,” said chiropractor Jeff Eaton. “At most you feel a little bit of warmth. It’s called cold because it’s not like a hot diamond cutting laser or anything like you see on TV.” 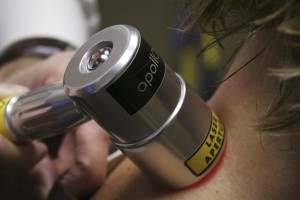 Cold laser therapy is a form of light therapy. A cold laser device, which produces a beam of light, is applied to the injured area and stimulates healing.

According to chiropractor Matt Tubbs, when laser light is absorbed by the tissue, it triggers reactions in the cells and chemical substances are produced, released and carried by the blood to other parts of the system.

The therapy is used on injuries affecting soft tissue areas of the body: muscles, tendons and ligaments.

“Addressing the soft tissues is half the battle in most cases,” Tubbs said.

Eaton said he’s seen the benefits on those suffering from disc herniations and chronic arthritis, as well. 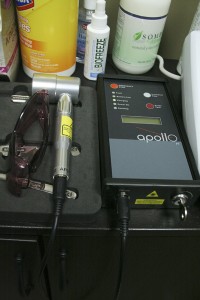 Since adding this treatment to his therapy roster in May 2009, Eaton has treated more than 100 people using this technique. Tubbs said since adding it to his business in September, he’s had about 20 people already receiving the therapy, and more people asking about it each day.

Donna Farrell said cold laser therapy has done “amazing” things for her. She suffered from daily headaches, which she began to think was normal.

She noticed a change in her first laser therapy session with Tubbs.

“After suffering with daily headaches for so long, I wish I had known about this sooner,” she said.

Joan Anderson agreed. She suffered from constant back pain and headaches when she approached Tubbs about using the therapy.

“I was feeling miserable and my husband saw an ad about a different way of approaching pain,” she said.

Tubbs paired Anderson’s cold laser therapy with another technique using stainless steel instruments, and a month into the treatment, she’s happy with the results. Her range of motion is better and she even sleeps much better at night.

“It’s really working,” she said. “My arms aren’t going to sleep anymore. The numbness is gone.”

Tubbs said the therapy takes only about two minutes, compared to similar kinds of therapy, which take 10 to 15 minutes. 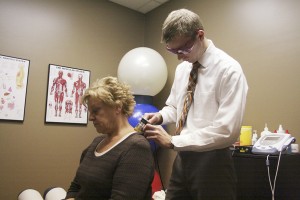 Joan Anderson received cold laser therapy from chiropractor Matt Tubbs earlier this month. She said the therapy has helped with her back pain and headaches. -- Michelle Haacke/Albert Lea Tribune

According to Eaton, it takes a couple of hours after receiving the therapy to really notice relief, due to the nature of how it works.

He also said side effects are virtually nonexistent.

“If it’s run over an eye or a cancer cell, it could be detrimental but those are things we ask our patients before we do the therapy,” he said. “Other than that, there are pretty much no side effects.”

While new therapies — and the field of chiropractics in particular — are sometimes scrutinized by skeptics, Tubbs has only one thing to say: Just try it.

“Get treatment and you’ll see results,” he said. “If we can decrease someone’s pain and get them feeling better, that’s all the coaxing I need to do.”