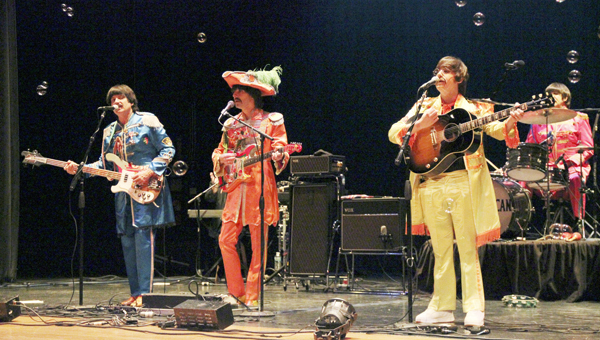 American English, coined the ultimate Beatles tribute band because of the musician’s striking similarities in their songs and their looks, performed 30 songs during the 2 1/2 hour set at the Albert Lea High School auditorium. 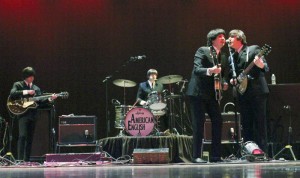 American English kicked off the show with “Please Please Me,” dressed in tailored black suits with thin lapels, button-down white shirts and skinny black ties from the “The Ed Sullivan Show” era, followed by other early hand-clapping favorites, including “I Want to Hold Your Hand,” “She Loves You” and “A Hard Day’s Night.”

Eric Michaels, the band’s Paul McCartney, brought the crowd to silence with his spot-on vocal rendition of “Yesterday,” complete with the accompaniment of his left-handed acoustic guitar. 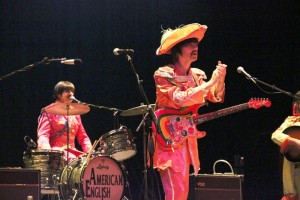 Doug Couture, as George Harrison, gets the crowd going during the second set.

The crowd was on its feet with rocking versions of “Roll Over Beethoven,” “I Saw Her Standing There,” and “Twist and Shout” before the band broke for the second set.

Already, fans were in awe.

“You close your eyes, and you can’t tell any difference,” she said of the tribute band.

Michael Knoll of Albert Lea, who toured the Beatles hometown, Liverpool, England, in 2002 and has been to the Beatles museum, couldn’t believe his ears or his eyes.

“I’ve seen two or three different tribute bands, and these guys are the best,” he said. “I can see why Paul (McCartney) had to go check it out. Their faces are so close, especially John and Paul.” 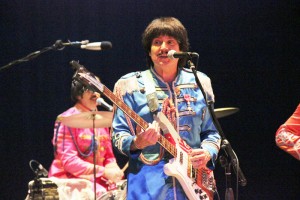 After a quick costume change, the band reappeared onstage circa 1967 and dove into “Sgt. Pepper’s Lonely Hearts Club Band,” followed by “With A Little Help From My Friends” and “Eleanor Rigby,” just to name a few.

The crowd came together on its feet again, singing and swaying to “All You Need is Love” and bubbles filled the stage, giving a whimsical psychedelic feel to “Yellow Submarine,” sang by Tom Gable as Ringo Starr on the drums.

After another brief intermission for the band’s third and final costume change and song set, American English was back — costumed in outfits resembling the “Abbey Road” cover — complete with a barefoot “Paul.”

Doug Couture reemerged as the long-haired denim clad George Harrison to perform a sobering version of “Here Comes the Sun.” The crowd was then back on its feet for rocking renditions of “Back In the U.S.S.R.,” “Let It Be,” and “Ob-La-Di Ob-La-Da.” 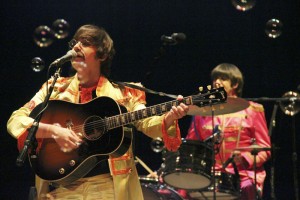 “You’ve been lovely, you’ve been great,” Michaels said to 600-plus spectators in his perfect Paul pitch and accent, before American English closed the set with “Revolution.”

“It was even better than I thought it would be — all of it,” said Wendy Nelson after the sing-along encore of “Hey Jude,” which had the crowd swaying with cell phones (in place of lighters) through the air. “I never saw the Beatles live, so that was the next big thing.”

Kay Goodmanson, director of marketing and sales at Thorne Crest Retirement Community, estimated Friday night that about 800 tickets were sold in advance at $15 each, which would bring the dollar amount from ticket sales to about $12,000. 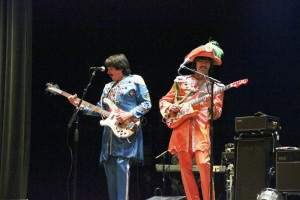 Eric Michaels, as Paul McCartney, and Doug Couture, as George Harrison, of Beatles tribute band American English played to a crowd of more than 600 people in Albert Lea Friday night.

The Leo Carey American Legion Post 56 hosted a burger basket fundraiser before the show with proceeds also being split between Thorne Crest and the Humane Society. It was unknown at press time the total proceeds from either fundraiser. 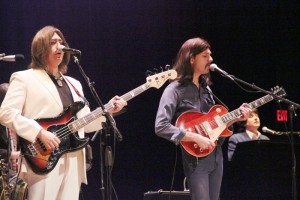 American English performed hits from the Beatles’ “Abbey Road” album in the third set of the concert, dressed in costumes from the album cover.

Thorne Crest will use the benefit dollars to install an upgraded entrance with barrier-free main entrance doors, allowing greater access for their residents and visitors as well as added security and energy efficiency.

The proceeds received by the Humane Society will go back into the two-to-one challenge grant by The Carl and Verna Schmidt Foundation out of Rochester. That means for every $1 donated through Dec. 11, the foundation will give $2.

These funds will be used replenish the building fund. 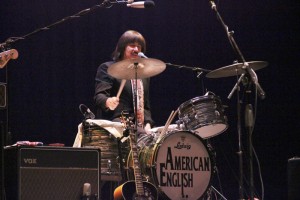 According to Nancy Rosenberg, volunteer with the Humane Society, any donations received after Friday’s event will go into the operations fund. She said the Humane Society’s goal is to eventually add a food bank and medicine bank for the pets who have been placed, to help owners be able to keep the animals they have adopted.

The Humane Society reportedly lost a $150,000 donation in escrow when Albert Lea Abstract Co. closed amid allegations of theft and racketeering. That money was to go toward an expansion of the animal shelter at Frank Hall Park.