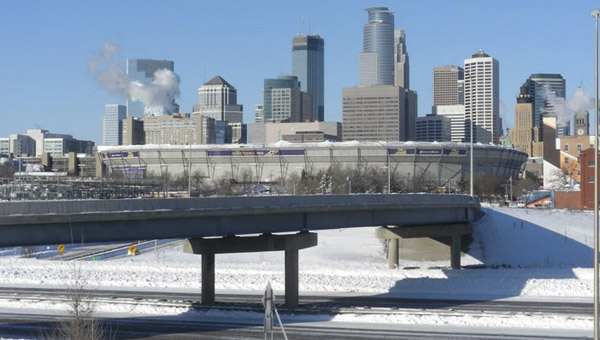 The skyline of Minneapolis from the east looks unusual without the white bubble of the Metrodome’s roof on Sunday. -- Jeremy Johnson/for the Albert Lea Tribune

MINNEAPOLIS — Through the years, Brett Favre and the Minnesota Vikings have turned to the Detroit Lions for comfort when things weren’t going their way.

The Vikings are 21-2 against the Lions in their last 23 meetings and Favre has more completions, yards and victories against them than any other team in his career.

Now, with Favre hurting and the Vikings rendered homeless by a massive snowstorm, the Lions are there for them both again.

The Vikings’ home game against the New York Giants was moved to Monday night in Detroit after the Metrodome’s inflated roof collapsed under the weight of heavy snow early Sunday morning.

The delay has given Favre more time to heal his sprained right shoulder, with his NFL-record streak of 297 straight regular-season starts hanging in the balance. It also gives the Vikings a warm, dry place to play after more than 17 inches of snow tore two giant holes in the Teflon roof and erased the familiar puffy white top from the east side of the downtown skyline.

Favre told USA Today on Sunday that he doubted he will be able to play on Monday night, but added that the postponement “does buy a little time.”

Time, according to interim coach Leslie Frazier, is exactly what the 41-year-old quarterback needs. He barely practiced at all this week and still has not thrown a proper pass since Bills linebacker Arthur Moats blindsided him last week and knocked him out of the game on the first series.

Frazier said he still thinks there’s a possibility Favre can play, “especially with an extra day” of rest.

“The rest is as important as anything for him,” Frazier said. “We’ll still get a chance to test some things out (Monday). This just bought us another day from a rest standpoint and treatment.”

The game originally was scheduled for Sunday afternoon and already had been pushed back because of the storm that dumped 17 inches of snow on Minneapolis and caused the Giants plane to be diverted from the Twin Cities to Kansas City on Saturday.

Metrodome officials told the league the roof wouldn’t be ready in time to play Monday or Tuesday, which sent the NFL and teams scrambling to find a new venue. The league also had discussions with New Orleans, St. Louis and Indianapolis and briefly considered the University of Minnesota’s outdoor stadium before deciding to hold the game at Ford Field at 7:20 p.m. Eastern time.

About an hour after the Lions beat the Packers at Ford Field on Sunday, stadium workers started scrubbing LIONS from one of the end zones.

“Obviously, we want to make it as hospitable as possible for the Vikings, since this is their home game,” Lions president Tom Lewand said. “We will do everything we can.”

Tickets for the game will be honored by fans who make the trip. The Lions will also start distributing free general admission tickets at 9 a.m., and the game will be broadcast on Fox affiliates in the local markets and on DirecTV’s Sunday Ticket package.

It’s the fourth time in the 29-year history of the Metrodome that the roof has caved in from heavy snow, and first since 1983, when a baseball game between the Minnesota Twins and California Angels had to be postponed.

The Vikings are scheduled to host the Bears on Monday night next week. Metrodome officials are optimistic that the roof can be repaired in time, but it is still unclear if that will be the case.

The Vikings have dealt with turmoil all season long, from an NFL investigation into Favre allegedly sending inappropriate messages and photos to a Jets hostess in 2008 to the firing of head coach Brad Childress and through a disappointing 5-7 start.

“Our guys are resilient. They’re professionals. This is what we do for a living,” Frazier said. “They’ll adjust. We talk all the time about being able to handle adversity and they’ll handle this.”

It’s been no picnic for the Giants either, who were stranded overnight in Kansas City and planned to take a flight to the Twin Cities Sunday morning before heading to Detroit in the afternoon.

“A lot of guys have been getting kind of tired, so right now we’re trying to get off our feet and get mentally back into this football game,” defensive end Justin Tuck said. “There have been a lot of ups and downs and a lot of uncertainty under it and now I guess things are set in stone.”

Co-owner John Mara said the only venue the Giants were really concerned about was the University of Minnesota’s TCF Bank Stadium, only because the team did not bring any cold-weather gear with it. But school officials told the NFL it couldn’t get the stadium ready in time, making that a moot point.

“They have really taken it in stride very well,” Mara said of the players. “They have been laughing and joking about it. They have taken it about as well as possibly can be expected and that includes the head coach by the way.”