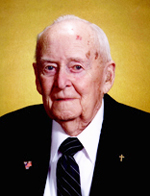 He was born Oct. 13, 1919, in Albert Lea, the son of Edwin R. and Della (Danner) Larson. He graduated from Albert Lea High School in 1937. He attended Minneapolis Business College until accepting a position with the Farm Home Sales Agency in Appleton. He returned to Albert Lea to work with the Minnesota Highway Department and also worked in St. Cloud. He entered the United States Army on May 25, 1942, and was stationed at Camp Callen, Calif. He was sent to Camp Davis, N.C., where he completed college courses in math and taught surveying. Enroute to Camp Haan, Calif., he stopped in Albert Lea to marry Lorraine Skaug on Dec. 9, 1942, at Central Lutheran Church. They both journeyed to Riverside, Calif., where he served at Camp Haan. He was promoted to Chief Warrant Officer in the position of Reconnoissance Officer. His battalion was transferred to Fort Bragg, N.C., and from there to Fort Dix, N.J., and then to England. He saw much combat in France and Germany. He was awarded the European Theater Ribbon with two Battle Stars, the Bronze Star and the Purple Heart.

Following his discharge from the Army in April of 1946, he returned to Albert Lea again working for the Minnesota Highway Department. He became a Registered Professional Engineer in May of 1955. He came to Owatonna in September of 1955 as project engineer. He was promoted to resident engineer in 1956 while supervising the construction of the first section of Interstate Highway to be constructed in Minnesota (I-35) from Owatonna to 7.8 miles north. He also supervised the location, surveying, design and construction of I-35 from Faribault to the Elko interchange as well as other highways in southern Minnesota. He also determined the location of the Interstate Highway in Steele and Rice Counties.

He was promoted to Assistant District Engineer-Maintenance in September of 1963 where he was responsible for 733 miles of highways in Mower, Freeborn, Dodge, Steele, Rice and Goodhue counties. He retired in January of 1982.

As a professional engineer he was past president of the Traverse de Sioux Chapter of the Society of Professional Engineers. He is a member of Trinity Lutheran Church where he served six years on the board of trustees and four years as its chairman, and was co-organizer of the Usher’s Society where he has served as chief usher for six years and usher since 1956. He also served as president of the congregation for one year.

He is preceded in death by his parents; wife, Lorraine; and one brother, Dale.