A date with the excavator 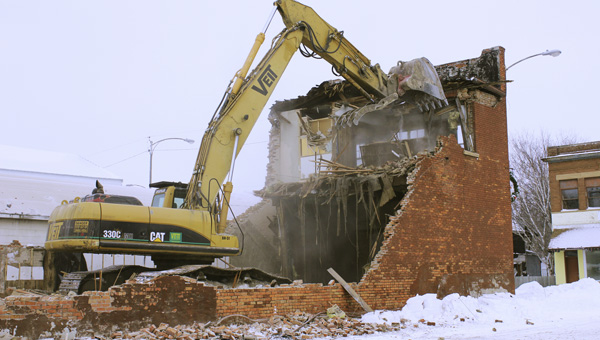 An excavator from Veit of Rochester ripped the back of the old hardware store out on Tuesday. -- Michelle Haacke/Albert Lea Tribune

On Tuesday, nearly 20 locals braved frigid temperatures to watch the demolition of the old hardware store. 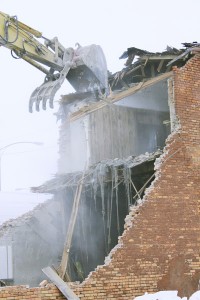 A bulldozer began tearing down the old cafe on Main Street in Emmons on Tuesday. -- Michelle Haacke/Albert Lea Tribune

It was the first of three buildings on the town’s Main Street to be flattened by Friday.

Across the street to east corner of Main and State streets, sat a former grocery store and beside it, the “legendary” Sharkey’s, both awaiting their date with the excavator.

After years of deterioration, the city of Emmons ordered all three buildings to be torn down.

“It’s sad,” said resident Arvilla Clemmetson. “I mean, I know they are not in the best condition, but they were part of Emmons and they could’ve been kept in repair.”

According to Emmons Mayor Jeannie Opdahl, the buildings were badly deteriorated and posed a safety hazard to the general public. Two of the structures — the former cafe and former grocery store — were constructed of brick, which was literally crumbling with bricks falling off. The former Sharkey’s structure, made of wood, had siding stripped because of asbestos. 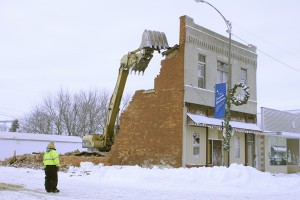 An excavator with Veit of Rochester ripped the old apartments out of the back of the former hardware store in Emmons on Tuesday. -- Michelle Haacke/Albert Lea Tribune

Emmons Councilman Loren Honsey said that financially it made sense to demolish the buildings, as it would cost much more to try and restore them than tear them down.

“We’re just trying to clean up the town,” Honsey said. “They were real eyesores.”

The total estimated valuation of all three properties is $37,800.

Michael Lamb, reportedly the only Lamb residing in the area, could not be reached for comment.

Emmons Councilman Jerry Martinson said he didn’t know of any plans for the land owned by the city, but it would be available if somebody wanted to build a new business. 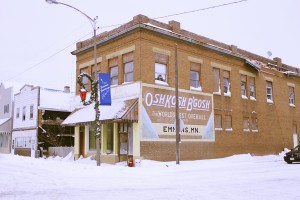 The old grocery store on the corner, and former barber shop/Sharkey’s pool hall next door, were both awaiting demolition on Tuesday. -- Michelle Haacke/Albert Lea Tribune

Clemmetson, who was born and raised in Emmons, is considered a historian of sorts for the town. She remembered several different uses of the building on the west side of Main and State streets through the years: a hardware store, a cafe, a beauty parlor, a couple of apartments upstairs and a basketball court.

The grocery store across the street, still donning the old “Osh Kosh B’Gosh” sign painted on the brick, also had apartments upstairs.

Perhaps the third building, the lonely wooden structure next door to the grocery store, was the richest in history.

Once the site of Wick Barber Shop and then the Old Reliable Barber Shop, Gordon A. Lee barbered in the front half of the building for more than 50 years. Also known as “Sharkey,” Lee ran a pool hall out of the back.

Clemmetson remembered having her hair cut at Old Reliable as a kid, back when Sharkey and Owen Peters worked together. She also remembered the pool hall.

“The kids use to be there, it was a good place for them to go,” she said.

“We played a lot of pool there,” Martinson said. “Sharkey taught all the young men in town how to play pool.”

“And all the guys from Albert Lea, too,” Honsey said. “That’s history coming down.”