The Polis family of Albert Lea hopes to ring in the New Year by tickling the funny bones of locals.

Jeff Polis, who heads up “Comedy Live,” is excited to bring national headliner Dwight York to town on Friday.

Even more exciting for Jeff, however, is that this will be his first show to feature both of his sons, Mike and Joe Polis. In fact, this will be Joe’s comedic debut. 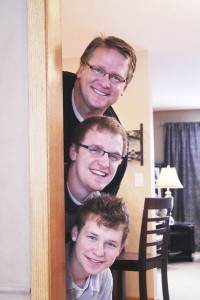 Joe, Mike and Jeff Polis (bottom to top) will all perform for the first time together at Friday's comedy show at the American Legion. -- Michelle Haacke/Albert Lea Tribune

“Comedy is really a family affair with us,” said Jeff. “Watching my two boys is a good feeling but nervewracking.”

Mike, a 2006 Albert Lea High School graduate, will emcee the event. This will be his sixth show. He’ll take a few minutes to warm up the show and introduce each act.

“It kind of gets the flow of the show going,” said Mike.

Next up comes Joe, a 2009 Albert Lea High School graduate. He will own the stage for five minutes, which could feel like a lifetime if the laughs don’t come from the audience.

But he’s not worried.

“I’ve watched these guys do it and Dad’s helped me shape my stuff,” said Joe.

Joe consulted with Jeff when he decided to do the bit, finding out the average age of his crowd and putting together age-appropriate material.

Mike and Joe have grown up with comedy. Jeff, a 1983 Albert Lea High School graduate, officially got into the comedy scene in 2003 to bring acts to the area.

He always enjoyed watching “The Tonight Show Starring Johnny Carson” and mostly looked forward to the acts of comedians like Jerry Seinfeld and Roseanne Barr at the end of the hour.

After that, Jeff began watching HBO comedy specials and eventually decided to try his hand at it, taking the stages at open mic nights in the Twin Cities area and around the region.

“I’d drive three hours round-trip for three minutes on stage,” Jeff said. “I wanted to get something closer.”

He began organizing shows under the name “Comedy Live” while tailoring his own act by attending comedy workshops around the country, including one at the Jon Lovitz Comedy Club in Los Angeles. Jeff was voted runner-up at a laugh-off in the Twin Cities, works with Scott Hansen of regional act Scott Hansen and the Stagebenders quite often and has opened for Minnesota-raised stand-up comedian Louie Anderson, too.

While Jeff, Mike and Joe all have their own personal preferences when it comes to comedy acts, they all cited Nick Schwartzen, a Minnesota native who found stardom on Comedy Central’s “Reno 911,” as a common influence and friend.

Jeff said when it comes to being funny, people’s judgments can get skewed.

“So many times people think they’re funny but it’s a different kind of thing when you’re with your friends laughing about an inside joke or personal things,” Jeff said.

His personal worst experience, he recalls, was the time he was about a quarter of the way through his act and his mind simply went blank.

“I started stammering and kind of stood frozen. It was the worst feeling in the world,” he said.

A couple of words jogged his memory and he regained his focus, getting back on track.

While Jeff’s proud that both Joe and Mike will join him in the New Year’s Eve show in Albert Lea, he’s also a nervous wreck.

So is his wife, Penny, who Jeff said pitches in to help write some material but rarely comes to the shows because she gets so nervous for her loved ones.

The Polises boast a clean routine and hope not only to get the belly laughs but also to relate to the crowd in a manner that draws in the masses.

“What you’re really trying to do is getting your audience to know you personally,” Jeff said.

“Comedy Live” presents Dwight York on Friday at the Leo Carey American Legion Post 56. Preshow music by Josh Elwood begins at 7:30 p.m. and the comedy show begins at 8 p.m. featuring emcee Mike Polis and the comedy of Joe Polis, Jeff Polis and York. Tickets are available in advance for $15 and at the door for $20.