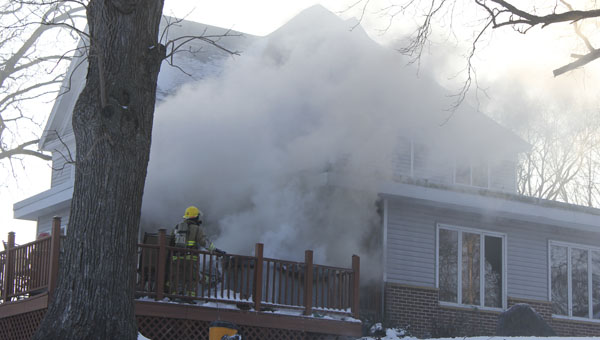 Steam and smoke rise from a deck where a hot tub caught on fire Thursday afternoon. The fire had just caught the house when firefighters doused it. No walls had to be ripped out. -- Tim Engstrom/Albert Lea Tribune

One Albert Lea family will get to celebrate Christmas at home, thanks to a speedy Albert Lea Fire Department.

Albert Lea firefighters and police officers responded Thursday afternoon to a fire that ignited from a hot tub on a deck that overlooks Fountain Lake. 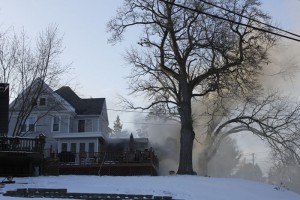 The home, 1411 Sunset St., is on the hill that Sunset climbs near the junction with Lakeview Boulevard. It is the home of Dustin and Melissa Barr and their son.

Capt. Scott A. Hanna of the Albert Lea Fire Department said the investigation did not determine what sort of electrical malfunction caused the hot tub to ignite, but it was ruled accidental.

He said having a staffed fire department — as opposed to a volunteer one — meant the firefighters were able to arrive in time to keep the fire from burning the house down. The firefighters arrived in about three minutes.

Hanna said a house fire can double in size every minute to two minutes.

The fire had engulfed the hot tub and had just reached the north wall along the deck with 10-foot-high flames when firefighters were able to get it under control. Firefighters felt confident there was no need to tear out the wall to check for hot spots within the structure.

Hanna said it is the difference between having some exterior damage or “they could be looking for somewhere to stay for Christmas.”

The investigation did not pinpoint the electrical malfunction in the hot tub that caused the fire, but it was ruled accidental, he said.

Black smoke rose above the neighborhood during the fire. It then turned to gray as water was applied — a mix of smoke and steam. The first caller to dispatch reported a deck on fire near Sunset and Lakeview. The second provided an address. The third said it was a hot tub.

Melissa Barr said she and her family very much favors a staffed fire department.

“We are definitely they got here when they did,” she said.

She said she received a phone call at her work, Albert Lea Medical Center, about the fire. She called Dustin, who was at the Albert Lea Family Y. Dustin came home right away.

They said they are looking forward to celebrating Christmas at home.