Frank L. Cory, 96, of Minnesota Lake, died Monday, Dec. 27, 2010 at Parker Oaks Community Home in Winnebago. A Mass of Christian burial will be held Monday at noon at St. John the Baptist Catholic Church in Minnesota Lake. Visitation will be one hour prior to the service at the church. The Rev. Mark McNea will officiate and burial will be in OLMC Catholic Cemetery, Barber Township, Faribault County. Bruss-Heitner Funeral Home in Wells is in charge of arrangements. 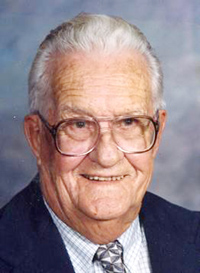 Frank L. Cory was born Oct. 12, 1914, in Walnut Lake Township, the son of Charles F. and Catherine (O’Leary) Cory. He attended country school at District No. 42 through the eighth grade, then attended school for one year at Minnesota Lake, and graduated from Wells High School in 1933. Frank worked at Bill Augst’s Our Own Hardware store in Wells until 1942 when he joined the Air Force. He was a veteran of World War II and was honorably discharged in 1947. He worked for the Veterans Administration until 1950 when he was called back to serve during the Korean Conflict from 1950-1951. He was stationed in Florida and worked with the Radar Network. He returned to Minnesota Lake in 1951 and worked for Beske Hardware until 1959 when he started Cory’s Home Service. On June 6, 1969, he was united in marriage to Helen F. (Stenzel) Sonnek in Minnesota Lake. Frank retired and sold the business to Bill’s Hardware in 1997. Frank was a 50 plus year member of the Minnesota Lake American Legion, and had served on the volunteer fire department for Minnesota Lake. He had a very quick wit and enjoyed visiting with friends and family. He loved people. He enjoyed hunting and fishing. He was an excellent cook and enjoyed making meals. Frank was a very generous man to many people when he owned his business.

He is survived by his step-daughters: Lorraine Oren of Salem, Wis., Marlene (Sanford) Meyer of Buffalo, and Shari Kopesky of Fridley; along with many step-grandchildren and step-great-grandchildren, nieces and nephews.