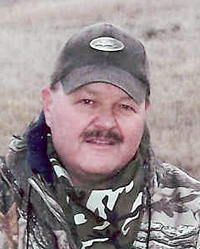 Gene Merrill Hove, 53, of Blunt, S.D., passed away, Sunday, Dec. 12, 2010, as a result of an automobile accident near Canning, S.D. A 24 hour wake begins at 6 pm today at the Lower Brule Community Center with a prayer service at 7 p.m. A funeral service will be held at 11 a.m. Thursday at Assembly of God Church in Pierre with burial at Holy Name Episcopal Cemetery in Ft. George. Arrangements have been placed in the care of Isburg Funeral Chapel. Online condolences may be sent at www.isburgfuneralchapels.com or mailed to New Life Assembly of God Church, 1120 N. Harrison Ave., Pierre, SD 57501.

Gene was born in Albert Lea on June 8, 1957, to Merrill and Geraldine Hove of Kiester. He was baptized at Immanuel Lutheran Church in Kiester and was confirmed at Trinity Lutheran Church in rural Kiester. He was a 1975 graduate of Kiester High School where he enjoyed competing as a wrestler. Upon completion of courses at Albert Lea Technical School in Albert Lea he became a certified HVAC technician. His career took him from the Holiday Inn in Albert Lea to Hutchinson Tech in Hutchinson, to Hutchinson Technologies in Sioux Falls, S.D. For the last 20 years, Gene was employed by the State of South Dakota as an HVAC technician. He was recently developing his independent heating, air-conditioning and refrigeration business.

Gene was known for his sportsmanship, enthusiasm and his winning smile. These attributes were evident when he umpired softball and officiated as a volleyball referee. Raising springer spaniel and German shepherd puppies was one of his specialties as well as a business venture. He had a passion for the outdoors and especially enjoyed hunting—from which he had many trophies and good hunting stories. Camping was another favorite, but spending time with his family topped the list. He took special delight in his grandchildren.

He was preceded in death by his grandparents, Palmer and Vera Hove and Floyd and Doris Olson.