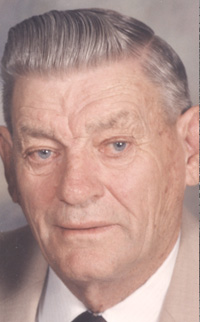 Gilbert was born on the family farm near Lerdal on Oct. 2, 1919, the son of Nels P. and Hannah (Peterson) Larson. He was one of eight children which included six sisters: Annie, Emma, Ella, Vanda, Vivian and Doris, and brother, Ray. Gilbert lived his entire life on or near the Larson family farm in Riceland Township, near Lerdal. He was united in marriage to Harried L. Nelson on Sept. 30, 1939, at the First Baptist Parsonage in Clarks Grove.

Gilbert’s life was centered on the love for his family and the land. Family and friends hold memories of his hardworking spirit, which he saw only as a labor of love for the land. He so willingly sacrificed for his family. He loved traveling “up north” to spend time hunting and fishing with them. Gilbert and Harriet enjoyed 29 years at their winter home in Tucson, Ariz., but the farm in Lerdal was always his true home. After retirement, Gilbert remained hard at work, gardening, planting flowers, mowing and blowing snow even until his last days.

He is survived by his loving wife of 71 years, Harriet; four children: Jean Waage of Tucson, Ariz., Jerry (Ellen) Larson of Lerdal, Larry (Sharon) Larson of Mendota Heights and Cindy (Danny) Lee of Lerdal; 11 grandchildren; 11 great-grandchildren; one sister, Doris Kraay, of Owatonna; and many nieces and nephews.

He was preceded in death by his parents; five sisters; and his only brother.

He was much loved and will be deeply missed by family and friends.