The first cold snap of the year is always one of adjustment. I am not one of those people who spends a lot of time whining about the cold, but I do know that as Minnesotans we usually have enough winter clothes in our closets to dress warm and may even scare some people into thinking that there is really such a thing as Big Foot. There are numerous folks who head south for the winter months in search of warmer weather, and they are usually referred to by those of us that choose to stay put as snowbirds. I have always felt that four seasons are just enough variety to keep me interested. 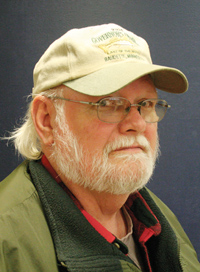 The last few days have given me time to get acquainted with my old friend the shovel, and the last snowfall was a piece of cake compared to the heavy wet stuff that fell a little earlier. I do have a snow blower now, but my first instinct is to break out the shovel and start cleaning the driveway. Although the old boy is starting to show signs of wear and tear, he still seems to work okay. Hey, wait a minute it sounds like I could be talking about me!

I actually look at shoveling snow as a good workout instead of drudgery, although last year when I almost ran out of room it started to seem a little too much like hard labor. Shoveling snow in December didn’t really seem all that bad, but by the time March rolled around I was getting pretty sick of it. Luckily my wife, Jean, thought it would be a good idea to look for a snow blower, and I was able to save some of my sanity along with my back. I do hope that the shovel will handle this year’s snowfall and that I really won’t have to fire the snow blower up at all. I guess its like the old horse and buggy being replaced by the horseless carriage. I know that the change will eventually come but not until I think its necessary.

Putting up the Christmas lights seems to get a little more challenging each year too. I try to keep the outside lights fairly simple, but I do like color. I don’t want to put on a light show like Clark Griswald, but the other evening I got this strange feeling that I was starting to resemble him. I was standing in front of the house trying to untangle the string of lights that the year before I had meticulously wrapped up so I wouldn’t be doing this same exact thing now. Once I managed to untangle the mess and put the lights on one of the trees on either side of the front steps I was ready to go. After stringing the other lights it was time to plug them in and admire my handywork. If you’ve dealt with outside lights at all the one thing that you probably already know is that on certain sets of lights, if one light is burned out the others go on strike. If it is a set of lights with those tiny bulbs I have found it virtually impossible to find the actual villain. When I figured I had everything under control I plugged the lights in only to find that one side of the house was lightless. I then decided that my only option was to look at some old light sets and eventually I was able to find one that worked. It was the good kind you know, the one that only burned out one light at a time. I didn’t have anyone there to stand and watch as I threw the switch to show off the dead string of lights, but I’m sure a couple of the neighbors were able to catch a few of the highlights. Eventually, like in the movie, everything worked and life was good.

Although the light thing can be trying it still hasn’t dampened my Christmas spirit. Earlier in the day I had went to my sister Judy’s to make lefse. We turned out four dozen lefse in a little under two hours, which was a record for us. We sampled a few pieces and it was deemed to be fish-worthy so we are ready for Christmas — bring on the lutefisk!

I think we can safely say that we are “inching” closer to the full hard water fishing season. Although the Minnesota Department of Natural Resources says ice is still not safe for vehicle travel the cold temperatures we have been experiencing the past week or so is encouraging. It makes you feel like the ice may now be thick enough for foot travel. With the numerous snowmobile and ATV accidents that have been occurring on the thin ice across the state we must still heed the warnings and be cautious when venturing out. There have been some portable houses spotted on both Fountain and Albert Lea Lakes but I haven’t heard of any fishing results as of yet. I don’t know for sure what the ice thickness is but I guess I’m always a little more apprehensive than most when it comes to first ice-over.

The DNR warns ice anglers, snowmobilers, skiers and other outdoor enthusiasts to use caution when going onto any lake covered or partially covered with ice, especially those that feature aeration systems.

Aeration systems are generally operated from the time lakes freeze until ice break-up in the spring. They help prevent winterkill of fish, but they also create areas of open water and thin ice, which are significant hazards.

Two types of signs are used to post aerated lakes; “Thin Ice” and “Warning” signs. The person who applies for the permit (permittee) is to maintain “Warning” signs at all commonly used access points to the lake. This sign warns people approaching the lake that an aeration system is in operation and to use extreme caution.

With this message in mind we must always use caution while fishing on our two main lakes Fountain and Albert Lea Lakes because both have aeration systems in place and in the case of the channel there is usually always some open water.

Until next time, please stay off the thin ice and above all enjoy the great outdoors!

Remember our brothers and sisters who are proudly serving our country so that we can enjoy the freedoms that we have today.

Dick Herfindahl’s column appears each Friday in the Tribune.