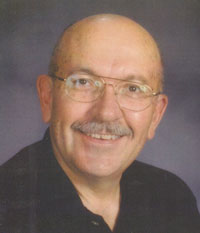 Mass of Christian burial is set for 11 a.m. Friday at St. Mary’s School gymnasium with the Rev. Peter Klein presiding. Friends may greet the family on Thursday at Brick – Meger Funeral Home, 1603 Austin Rd., Owatonna, from 4 to 7 pm. A private family interment will take place at a later date. The Owatonna Knights of Columbus will recite the Rosary at 7 p.m. at the funeral home on Thursday. Friends may greet the family one hour before the funeral liturgy on Friday at St. Mary’s School.

Gerald “Jerry”Allen Kent, the son of Francis and Angeline A. (Chicos) Kent, was born on Oct. 13, 1948, in Albert Lea. He attended Freeborn High School and graduated in 1966. Following graduation, Jerry completed his undergraduate studies at St. Mary’s University in Winona, obtaining a teaching degree. Jerry was united in marriage to Jean Klocek on July 18, 1970, at St. Casmir Catholic Church in Wells. He accepted a teaching position at St. Mary’s School in Owatonna where he taught for ten years. Following this, he took a position at Truth, Inc for two years. He returned to college and earned his master’s degree in education from Mankato State University. He was hired as the administrator of St. Mary’s School in 1985; a position he held until his retirement in 2009. Jerry was a member of the Owatonna Knights of Columbus Council No. 945 and Owatonna Sertoma Club. His life interests include annual hunting and fishing trips, reading, spending time with his grandchildren and being a care giver for many friends and family members.

Jerry is survived by his wife, Jean; son and daughter-in-law, Chris (Nikki) Kent of Rosemont; his three grandchildren: Will, Jake and Cooper; his mother, Angeline Kent, of Country Side Assisted Living in Owatonna; and a brother Terry Kent of Lancaster.

Jerry was preceded in death by his fathe,r Francis; brother, Robert; and sister-in-law, Kathy Kent.

Memorials are preferred to St. Mary’s School in Owatonna.