Knights down Clippers in OT 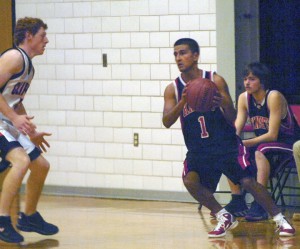 Alden-Conger's Michael Bernal takes the ball on Tuesday against Cleveland.

ALDEN- Michael Reyerson recorded a double-double with 24 points and 18 rebounds as the Alden-Conger Knights boys’ basketball team overcame an early 12 point deficit and defeated the Cleveland Clippers in overtime 56-52 Tuesday in Alden.

“We started slow, we couldn’t get anything going or hit a shot,” Alden-Conger coach Bill Hintz said. “But they kept plugging at it and never gave up.”

The Knights found themselves down 11-0 early in the first quarter until Michael Reyerson made a free throw to break the 11-0 run.

The Clippers pushed the lead to 17-5 when Tommy Kraft drained a free throw to give Cleveland their largest lead of the night.

The Knights then used a 10-5 run, with eight of the points coming from Reyerson, to cut the Clippers lead down to 22-15 at half time.

“We’re still trying to find ourselves,” Hintz said. “They are not sure how to play defense the way I want them to. Our shooting, we took some poor shots. It was just an ugly first half.”

After a lackluster first half, the Knights came to life in the second half.

Alden-Conger used a 6-0 run to cut the lead to one point in the opening minutes of the second half at 22-21.

The Knights would take their first lead of the game late in the second half when Tyler Adix hit one of two free throws to give Alden-Conger a 44-43 lead.

Moments later, Alden-Conger was hit with a technical foul that sent Cleveland’s Tyler Seitz to the line with the opportunity to take the lead for the Clippers.

The teams would trade two baskets down the stretch with Tommy Kraft hitting a jump shot to tie the game at 48 with eight seconds left and giving Alden-Conger a last opportunity to win the game.

In the eight seconds, Reyerson caught the ball went to full length of the court and missed a running jumper to send the game into overtime with the teams tied at 48.

“They were huge,” Hintz said of Reyerson and Adix. “They came through and they did all right.”

Reyerson ended the night with 24 points and 18 rebounds, while Tyler Adix had 16 points and eight rebounds.

“He didn’t give up at all,” Hintz said of Reyerson. “He went at it hard and I hope that shows all the other kids the same thing.”

Alden-Conger dominated the boards as they outrebounded the Clippers 38-15 on the night.

The Knights are back in action on Friday as Alden-Conger travels to Granada to take on G-H-EC.

Officials to NFL: Metrodome won’t be fixed by Mon.