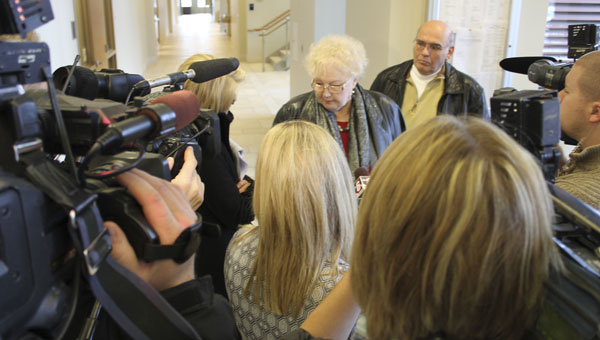 Myrna Sorensen of Alden speaks to the news media about the sentencing of Ashton Larson, convicted of abusing helpless elderly patients in her care, on Wednesday at the Freeborn County Courthouse in Albert Lea. Sorenson is a family member of one of the victims. -- Tim Engstrom/Albert Lea Tribune

Her lawyer asked for the sentence to begin Monday because of the Christmas holiday. Freeborn County District Court Judge Steven Schwab denied the request, sending her to jail immediately.

Under the sentencing, Larson will serve 60 days in jail immediately, 60 days will begin July 22, 2011, and 60 days will begin Dec. 22, 2011. The Freeborn County jail normally does not house women inmates, but she stayed there Wednesday night. It is up to the jail administrator where she will go next. Broitzman, in October, was sent to Blue Earth. She was released from jail Dec. 2 and could ask to waive her coming jail terms. 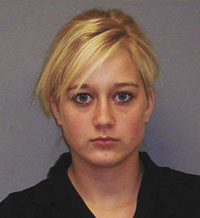 Larson, 20, is one of six young women who faces charges tied to allegations of abuse of residents at the Good Samaritan Society of Albert Lea nursing home from January through May 2008. She and Broitzman have been charged as adults, and the remaining four young women were charged as juveniles with failure to report suspected abuse because they were under 18 at the time of the alleged abuse.

Larson stood and turned to the victims’ families in the gallery at the courtroom to read a statement. She said, in tears, she understood if they didn’t accept the apology. She said she was willing to speak to them anytime about anything.

“This has made me grow up very fast, and I know what I did was extremely harmful and dumb,” she said.

Schwab also sentenced Larson — who pleaded guilty in October to three counts of disorderly conduct by a caregiver, all gross misdemeanors — to eight days of community service for each count, two of which must be served each month.

She will be required to complete a psychological assessment, submit letters of apology to the families of the three victims in the case, complete one-on-one education with ElderCare Rights Alliance and meet with the victims’ families if they so choose to answer questions.

In addition, she can have no direct or indirect contact with vulnerable adults unless she gets the prior approval of her probation agent and cannot be employed as a caregiver for the time of her probation.

The charges did not call for sentencing guidelines, and because it was not a felony, prison is not possible. Schwab said he looked at aggravating factors and mitigating factors, the same he had done in the Broitzman case.

Aggravating factors were victims being particularly vulnerable, having multiple victims and multiple incidents, committing the crime in the victims’ “zone of privacy” (their rooms in the nursing home) and the crime being committed by someone in a position of authority or trust. Mitigating factors were that Larson was amenable to probation, shows remorse and accepts responsibility for her actions.

He said the aggravating factors outweigh the mitigating factors. However, Schwab acknowledged Larson had shown some attempt at genuine remorse prior to sentencing. In the Broitzman case, he said she had not shown any remorse until sentencing. Still, he felt Larson deserved a harsher sentence than Freeborn County Court Services had recommended.

“And by harsher, I mean more jail time,” Schwab said.

The recommendation from Court Services totaled 60 days in jail.

Larson had been an Albert Lea resident but recently moved to Alden. She has a job and attends college; continuing those pursuits will depend on the jail rules.

Four people spoke at the sentencing on behalf of victims.

Jan Reshatar said her mother was a woman “of great love and joy.” She said she was a “classic grandmother” who loved music and would sing “You Are My Sunshine” even though she suffered from the affects of Alzheimer’s disease.

She said it was hard to imagine anyone who would inflict pain on her. Now, it is hard to think about.

“These are normally places where darkness and negativity live,” Reshatar said.

She said she wants Larson to know she committed a hateful act on another person.

“We absolutely do not understand how another person could do this,” she said. “We want to know at what point in her life she decided inflicting pain on another person was fun.”

Reshatar said family members of the victims now have a hard time trusting nursing homes, even though they know good people work there. She said it was hard to tell her father about what happened to the love of his life.

In tears, Reshatar said: “I promised her I wouldn’t let it happen to anyone else.”

Myrna Sorensen spoke on behalf of her late mother, of all families of the 15 known victims and of a victim who didn’t apparently have a family.

“These who Miss Larson should have looked at as extended grandparents are forever changed,” she said.

“To say we are angry is an understatement,” Sorensen said.

She asked Larson a question: “Would you like those things done to you and your family members?”

She read a poem to the court titled “Beatitudes for the Friends of the Aged” by Esther Mary Walker.

Her daughter also spoke. Billie Jo Schwierjohann said her grandfather had been a strong, hard-working, dependable man, and it was a tough decision for the family to put him in a nursing home.

She said they noticed how he became agitated and angry during the time of the abuse but were told those were symptoms of the disease he had. But when the Department of Health report came out in August 2008, they saw what the problem really was.

“This has put a dark cloud on our memories of him,” she said. “Imagine how humiliating it was for him, not being able to stop it.”

In the hallways of the courthouse afterward, speaking to news media from southern Minnesota and the Twin Cities, Sorensen said Larson’s statement didn’t mean much to her.

The sentencing marks the end of the criminal case. A civil case remains.