Made in Albert Lea 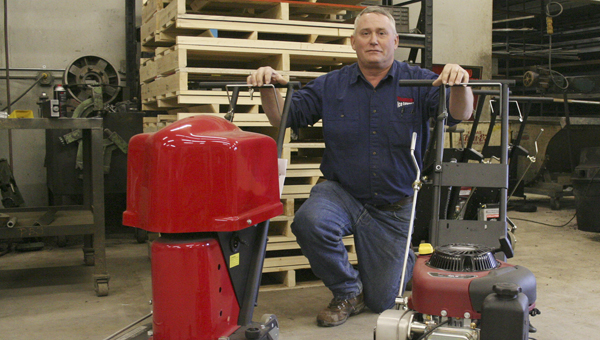 Vasco owner Steve Overgaard poses for a photo with the two different models of Thompson Ice Edgers. On the left is the cordless electric model that is battery-powered and on the right is the gasoline-powered model. -- Kelli Lageson/Albert Lea Tribune

Two companies under the same roof in Albert Lea create much of what is needed to make and maintain an ice rink.

Vasco and Rink Systems are both housed in the same building on Hershey Street. Vasco is owned by Steve Overgaard, who is also part-owner of Rink Systems with three of his siblings, brothers, Stacey and Scott, and sister, Susan.

Vasco started in Albert Lea originally as Valve Services by Overgaard’s father, Richard, in 1954. It originally serviced equipment at small creameries and dairy farms in a 250-mile radius. Overgaard said his father had to change the business when creameries started going out of business.

One of the changes is that Vasco bought the rights to manufacture Thompson Ice Edgers in 1999. The edgers are not often seen by hockey fans, but do an important job all the same. While most hockey fans see resurfacing machines, those large machines can’t smooth the entire rink. 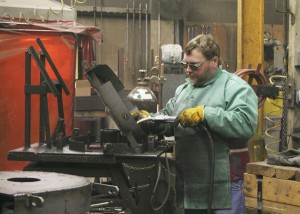 A Vasco employee works on the base of a Thompson Ice Edger. Vasco and Rink Systems are both housed under the same roof on Hershey Street in Albert Lea. -- Kelli Lageson/Albert Lea Tribune

“A resurfacer can’t reach all the way to the edge of the boards,” Overgaard said. “It also doesn’t get the corners.”

Using the resurfacers actually makes the center part of the rink lower than the outer edge. Most ice rink caretakers will use an ice edger once a day to smooth out the ice.

The ice edgers go to rinks all over the United States, and some are even sold internationally. There are currently two kinds of ice edgers being sold, a gasoline-powered model and an electric cordless model.

Overgaard said the company has had orders from many different kinds of customers, like cruise ships. He also said another unique order was from an environmental group that was trying to clean up an oil spill on a river in Wisconsin. They bought ice edgers to shave the ice that contained the oil off the water. Overgaard said it’s fun for him to travel to different arenas and find out they use Thompson Ice Edgers.

“I think it’s neat that something like that is made in Albert Lea,” Overgaard.

He said he thinks there are a lot of manufacturers in the area that make products that are found all over the United States. Rink Systems, which creates the boards and glass for ice rinks, has built rinks all over Minnesota and even nationally at places like U.S. Military Academy in West Point, N.Y.

“There’s a lot of different aspects to the companies,” Overgaard said.

Not only do they make ice edgers and rinks, they make any sort of tool or part that can be manufactured. Overgaard said he realizes that the company has to be flexible and manufacture many different things that customers request.

“Being more diverse has really helped us out,” Overgaard said.

He said he thinks there is a very small number of companies in the U.S. that manufacture the same products they sell, which is why he’s thankful the company can continue to evolve.