Memorial services for Margaret Kathryn Jacobson, 88, of Albert Lea, will be held at 11 a.m. Thursday at St. Theodore Catholic Church. The Rev. James Berning and Deacon Mike Ellis will officiate. Friends may greet the family one hour prior to the service at the church. Interment will be in St. Theodore Cemetery at a later date. To sign the guest book go to www.bayviewfuneral.com. 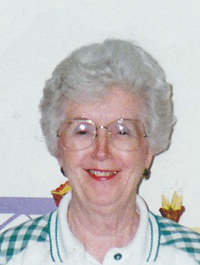 Margaret Kathryn Jacobson was born on Aug. 21, 1922, in Albert Lea, the daughter of Chancey and Margaret (Mullen) Elliott. She grew up in Albert Lea and graduated from Albert Lea High School. She attended business school after finishing high school. Margaret was married to Ray Skahan in the late 1940s. She and Ray owned and operated the Skahan’s Store in Albert Lea and Margaret later worked for Streater in personnel and as an executive secretary. In 1975, Margaret was married to Lurlin Jacobson. She was a member of St. Theodore Church, and was active in the CCW. She was also a member of the Eagles, Solo Parents, the Red Hat Society, and the Albert Lea Senior Center. Margaret loved to play cards and visit with friends. She was an avid baseball enthusiast. She and her husband enjoyed taking trips to Las Vegas and spent several winters there. She was an outstanding dancer and spent many happy times at the Terp Ballroom and other dancing spots in the area.