Funeral services for Margaret L. Woodard, 93, of Albert Lea, formerly of Glenville, will be held on Thursday, Dec. 16, 2010, at 2 p.m. from First Lutheran Church, Glenville. The Rev. Krista Stokka will officiate. Burial will be at Greenwood Cemetery. Visitation will be one hour prior to the services at the church. To sign the guestbook go to: www.bayviewfuneral.com. 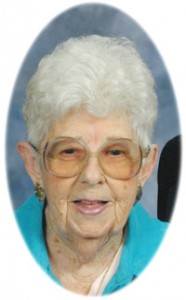 Margaret Louisa Woodard was born on May 10, 1917, the daughter of Frank and Kathryn (Watson) Nelson. She attended and graduated from Albert Lea High School in 1935. She worked at Interstate Power until her marriage to Robert Woodard on Jan 21, 1939, in Northwood, Iowa. The couple lived and farmed northeast of Glenville for 50 years. Margaret enjoyed knitting, crocheting and embroidery work until her sight began to fail. She also enjoyed gardening when she was able. She was a member of First Lutheran Church.

Margaret was preceded in death by her parents and two brothers.