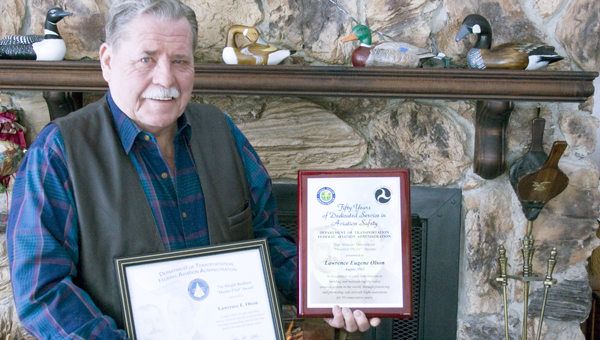 A local man has won an award that fewer than 2,000 people in the United States have won. 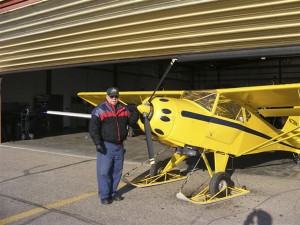 Olson stands next to Jim Hanson’s Kitfox airplane. Olson manufactured the skiis for the airplane so it can take off or land on snow.

The qualifications include having no accidents or violations to get the award. Olson said he’s always been concerned about safety, and he feels honored to have been given the award.

“Safety’s very important in flying,” Olson said. “You have to be precise in everything you do.”

Olson has been a resident of Albert Lea his whole life and is retired now from his occupation as a tool engineer. He decided in 1950 that he wanted to take flying lessons because he liked the opportunity to get places faster. 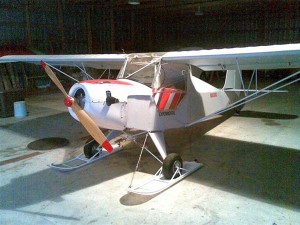 A Skyraider Ultra Light plane, which Olson has fitted with skiis so the plane is able to land in snow. He said he enjoys flying to lakes or snowy areas and hunting or fishing. -- Submitted photo

Since he started he has had the chance to fly many different kinds of airplanes and has spent thousands of hours flying.

He said there have been many changes at Albert Lea’s airport since he started flying. One change is the paved runway; when he started flying the airport was a large grass area where pilots could land or take off anywhere they wanted.

Not only is Olson a longtime private pilot, but he uses his experience in tool making and manufacturing to build airplanes. He said he has built five airplanes himself and helped others build aircrafts, too. He said he reads a lot and attends seminars to keep up on regulations and new technologies in building airplanes.

“I do a lot of reading to stay up with regulations,” Olson said. “It’s fun to see what you can accomplish.”

One of the largest airplanes Olson has flown is a Cessna 195, which has single radial engines, and has been used by the U.S. Army. Among the lighter planes he’s flown are single-place airplanes, meaning they seat one person. 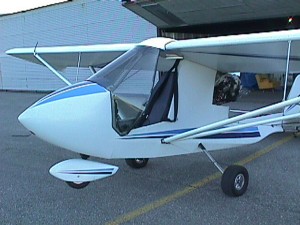 Pictured is a Challenger Ultra Light airplane. Single passenger airplanes, like this one, are among the lightest aircrafts Olson has flown. -- Submitted photo

Olson took an interest in ultralight airplanes in the 1980s and has stayed interested. He has built some and enjoys flying them. Hanson said though Olson could fly much bigger planes, ultralight planes can be more fun to fly.

“Smaller airplanes are great for people who just fly for fun,” Hanson said.

Hanson said Olson is an asset at the airport, because he helps younger people get interested in flying and manufacturing airplanes. Olson said it’s a good feeling for him to be able to pass on knowledge.

“He’s been a mentor to a lot of people who have started flying,” Hanson said.

Olson is also known for the quality of his manufacturing work, Hanson said. Being a tool maker by trade has helped him be able to make various parts. Olson has also taken an interest in manufacturing skiis for airplanes so they can land or take off from snow.

“You need experience about where to land,” Olson said. “There are many tricks to ski flying.”

Olson said in Minnesota it’s more practical to attach skiis to an airplane than to outfit the airplane to land or take off from water. He enjoys flying north and landing on lakes or in fields to fish or hunt.

“You can land on a lake and drill a hole for ice fishing,” Olson said.

Previously an airplane would only have skiis and no wheels, but recently Olson learned how to make the skiis fit around the wheel so the plane can take off from a runway, but also take off and land in snow.

Another one of his hobbies is to take aerial photographs while flying. He said he took many photos after the storms in June and has also been taking photos of the Bent Tree Wind Farm north of Albert Lea.