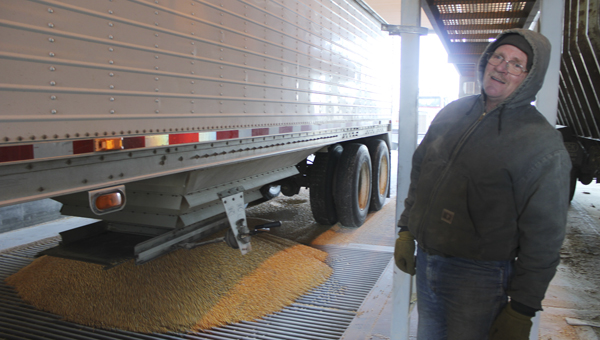 A driver for Jim Nelson Trucking unloads corn at Poet Biorefining on Tuesday. Ethanol blends like these made in Glenville will fuel NASCAR cars in 2011. -- Michelle Haacke/Albert Lea Tribune

GLENVILLE — Employees at Poet Biorefining in Glenville have long been NASCAR fans.

So the announcement last week that Growth Energy was partnering with NASCAR to educate Americans — full speed ahead — about the environmental and economic benefits of using domestic ethanol is hitting home. 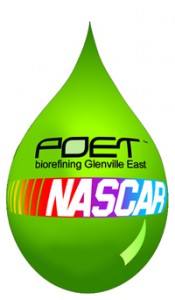 Poet Biorefining in Glenville is a member of Growth Energy, a group of ethanol producers and other ethanol industry organizations, which pushes to grow America’s economy through “greener” energy.

The partnership will connect Poet Biorefining in Glenville to NASCAR through its membership of Growth Energy, which will put ethanol front and center on race days by plastering an American Ethanol logo on the NASCAR green flag, fuel ports and introducing a new American Ethanol Green Flag Restart Award for drivers.

“We are so pleased that this American fuel we produce right here in town from homegrown corn is showcasing the environmental and high-performance qualities of ethanol on the national stage of NASCAR to so many American consumers,” said Poet general manager Rick Mummert.

This new partnership, announced by NASCAR CEO Brian France last week, comes just weeks after NASCAR publicly stated that it would be taking its environmental commitment to the next level by fueling its races with Sunoco Green E15 — a fuel that includes 15 percent renewable American ethanol, which is produced from corn grown by American farmers and processed at ethanol plants across the United States.

NASCAR will begin fueling its cars with ethanol upon the start of the 2011 racing season. Mummert said ethanol leaders have been courting this relationship for five years. 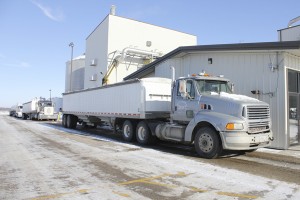 Although Poet will not be directly producing the fuel that the NASCAR cars will run off of, Mummert said the fact that NASCAR is making the switch from gasoline to ethanol blends is a milestone for Poet, and the ethanol industry as a whole.

“Through this partnership with NASCAR, we can tell America about the many benefits of domestic ethanol,” he said.

He scoffs at the $1 billion a day that Americans spend at the pump each day, filling their gas tanks with foreign oil.

“That money could help our ailing economy,” he said. 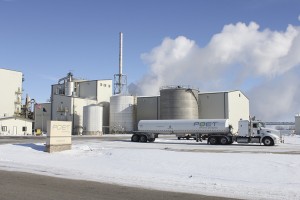 POET Biorefining is a member of Growth Energy, which announced last week a partnership with NASCAR. -- Michelle Haacke/Albert Lea Tribune

Mummert hopes the partnership will not only educate the general public about ethanol but also dispel untruths about the renewable energy source, such as the one that ethanol takes food out of the mouths of children. No sweet corn is used in ethanol production; only the starch from field corn.

Rather than discarding the corn after the starch is derived, Poet uses the other parts of corn in livestock feed. In fact, the Glenville plant consumes 15 million bushels of locally grown corn each year to produce 42 million gallons of ethanol and 120,000 tons of livestock feed annually.

Mummert feels that people in the Midwest generally understand the benefits of ethanol over gasoline, especially here in the Albert Lea area where several gas stations, including the Glenville Short Stop and Kwik Trip in Albert Lea, promote ethanol by providing E-85 fuel and/or blender pumps. It’s an understanding he hopes the NASCAR partnership can boost nationwide, in turn benefiting local farmers and the plant in Glenville. 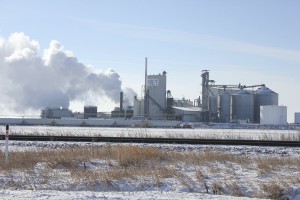 “The Indy 500 cars have been using ethanol for years now, and NASCAR has an even larger audience,” Mummert said. “If Indy and NASCAR can run on this, why can’t the family station wagon?”

Mummert also hopes the partnership will bolster some other industrywide changes, which would benefit local corn producers and Poet in the long run. Over the next five years, Mummert hopes to see subsidies put into blender pumps, a campaign with the major American auto makers to get flex fuel tanks in every American made car, and pipelines to get Midwest ethanol to the coasts.

The official partnership to NASCAR is being made through a new organization, American Ethanol, created by Growth Energy with the support of the National Corn Growers Association and other key U.S. farming and ethanol leaders.

As an official NASCAR partner, American Ethanol will become an integrated industry player with activation to include several firsts for the sport: