Sean Benz started playing guitar three and a half years ago. When he picked up a guitar to learn some Johnny Cash tunes, he had no idea he’d end up meeting Cindy Cash, let alone perform on the same show as her.

Benz, 18, is a high school senior who’s on his way to a country and classic rock and roll career. He loves the stage. He lives and breathes performing. It’s where he wants to be and he’s hoping to do it for a long time.

Benz first grew interested in the guitar after watching “Walk the Line,” a 2005 Johnny Cash biopic. 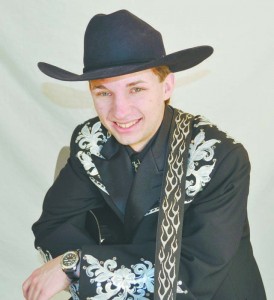 When his uncle gave him a Johnny Cash CD “The Legend of Johnny Cash,” he started learning the chords and singing a long to it whenever he could.

“It’s just the way that he sang it,” Benz said.

Now, after talent shows and performances aplenty, Benz will take his classic rock act to the Paramount on New Year’s Eve. He’ll be doing his well-known Elvis tribute alongside Denny and the DC Drifters, the Radio Hits and some of the contestants of Austin’s Got Talent.

His Johnny Cash tribute is his specialty. He recently won a Johnny Cash tribute contest in Hayfield, Wis. He even met Cindy Cash during the Lamar Bluegrass and Country Festival in Iowa, a week-long venue which draws more than 600 acts each year. Cash’s flight was delayed for a time, and everyone didn’t know if she would make it to Iowa to perform. She eventually made it down, just in time to catch Benz’s performance.

“She said I was the most handsome, youngest Johnny Cash she’s ever seen,” Benz said.

While performing is a joy for Benz, he also enjoys acting and choir at Worthington High School. He’s been on the stage since second grade, doing community theater before high school plays and musicals.

Benz hopes to take some downtime currently, as he’s concentrating on finishing high school. He’ll be working on his classic rock sound, as he wants to start moving in that direction musically, although he still plans on performing country hits. After graduation, Benz hopes to attend South Dakota State University, where he’ll major in music studies.

“I just love singing and dancing on stage, and having a good time,” Benz said.

Benz is one of four acts playing during the Paramount Theatre’s New Year’s Eve show.