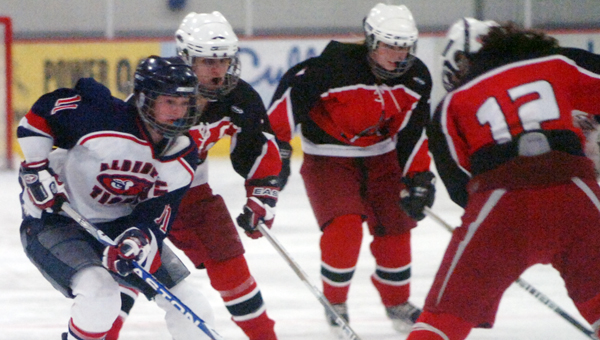 Albert Lea’s Anna Anderson had two goals and an assist Thursday as the Tigers girls’ hockey team won their third straight game with a 5-1 win over the Austin Packers at City Arena.

“We did a number of things well tonight,” Albert Lea head coach Paul Willett said. “We shot the puck, which was our goal and that is what we did.”

The Tigers had 34 totals shot on goal during the game, while Austin totaled 25 shots on goal.

With the all the shots on goal, it took Albert Lea exactly two minutes into the game to get on scoreboard.

Anderson got the puck at center ice and raced into Austin’s zone and put the puck past Packers goaltender Allison Hoban to push the Tigers out to an early 1-0 lead.

Later in the period, after a Packer penalty put Albert Lea on the power play, Sophia Jepson found Lauren Draayer who put the puck past Hoban for a power-play goal and Albert Lea held a 2-0 lead after the first period.

In the second period, Austin got on the board with five minutes and two seconds left in the period when Ashley Arhart scored a short-handed goal to cut the Albert Lea lead down to 2-1.

Minutes later, Albert Lea pushed the lead back to two goals when Natasha Moyer found the back of the net to give Albert Lea a 3-1 advantage.

Twenty-four seconds later, the Tigers found the back of the net again as Mariah Leach notched a power-play goal to give the Tigers a 4-1 lead after two periods of play.

In the third period, Anderson scored a short handed goal, her second of the game, to give Albert Lea a 5-1 lead.

Sydney Conley earned her third straight win as she notched 24 saves and made several key stops down the stretch for Albert Lea.

“She’s one of the best in the state in her age group,” Willett said. “She was very solid in net for us tonight.”

Allison Hoban took the loss for Austin as she made 29 saves on the night.

With a three-game win streak in tow and the offense generating 14 goals over that streak, Willett says his teams confidence is growing everyday.