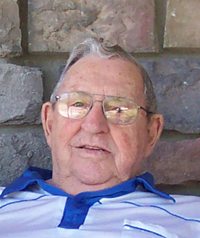 He was born May 20, 1922, in Emmons to John and Ida Dagestad. He graduated from Emmons High School in 1941 and enlisted in the Army Air Force. He served in WWII as a gunner on a B24 Liberator. A recent trip to Washington D.C. to visit the war memorial and Arlington Cemetery gave him great pride.

Palmer was a farmer for most of his life and he enjoyed his cows. He was a long term member of the American Legion and was proud to serve his country. He enjoyed visiting with family and friends, fishing, playing cards, reading, bingo, doing puzzles and spending winters in Texas.

He is survived by his wife of 65 years; four children; 10 grandchildren; 14 great-grandchildren; one great-great grandchild; brother, Ingvald (Elinor); sisters: Ruth Ranum and Betsey Johnson; cousins, nieces, nephews and many friends.

Preceded in death by his parents and sister, Janette Schave of Mankato.

Services will be held at 11 a.m. Tuesday at Fristad Lutheran Church in Centuria, Wis.