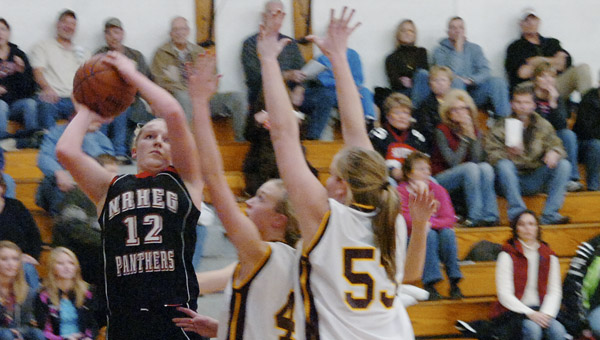 The Panthers (2-0, 1-0 Gopher) trailed by eight points midway through the second half but overcame turnovers to win by four.

Anna Schlaak, who sat much of the game in foul trouble, was key to the Panthers’ comeback, as she grabbed a team-high 11 rebounds to go a long with nine points.

The Panthers outrebounded The Buccaneers (1-1, 0-0 South Central) 54-31 and have five players with nine or more rebounds.

“That’s important to us,” Panthers head coach John Schultz said, of rebounding. “It shows they were all hustling.”

The Panthers connected on 6-of-13 3-pointers and shot a total of 40 percent from the field.

The Buccaneers shot just 29 percent from the field but made 24-of-39 free throw attempts.

Carlie Wagner had a double-double with 15 points and 10 rebounds with a team-high five assists, and Kristina Cole scored 14 points and grabbed nine rebounds.

Raelin Shue also had nine rebounds for the Panthers.