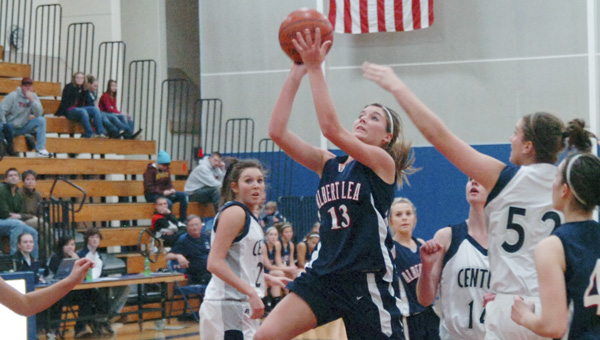 Albert Lea’s Alyssa Sager looks to shoot the ball Tuesday during the first half against Rochester Century. -- Jon Theuer

Entering Tuesday on a two-game losing streak, the Albert Lea Tigers girls’ basketball team looked to get back into the win column as they hosted Big Nine Conference foe Rochester Century Panthers.

Kanani Asuncion scored 18 points and collected 11 rebounds for the Panthers, while Maggie Pumper had 17 as the Panthers handed the Tigers their third-straight loss 71-59.

“If you look at what were trying to put in and the new things we are doing, it will take time to gel,” Albert Lea coach Sean Gilliam said. “So I think it was one of those things where we have hiccups. Those hiccups sometimes come from getting used to the rotation, to getting used to playing with one another and just trying to figure out how things work.”

The Tigers used a full court press that forced Century into several turnovers and took the Panthers out of their comfort zone early on in the game.

Both teams traded baskets throughout the first half, as neither team held a lead of more than five points.

The Tigers held a 30-25 lead late in the first half, but the Panthers used a 6-0 run, four of those points coming from Asuncion to give Rochester Century a 31-30 lead at halftime.

In the second half, the Panthers opened with a 17-4 run, picking apart the zone defense that gave them trouble in the first half and jumped out to a 47-34 lead.

Albert Lea would have an answer as the Tigers used a 15-5 run that eliminated a 14-point deficit and cut the Panthers lead to one at 52-51.

“You got to love that type of effort,” Gilliam said.

After cutting the lead to one, the Panthers would get into the bonus with 6:59 that helped Rochester Century close the game on a 19-8 run that gave the Panthers a 71-59 victory.

One of the differences in the game was free throw shooting.

Rochester Century went 20-of-30 from the free throw line, while Albert Lea went 6-of-14 from the charity stripe.

“I think it was one of those things where they aggressive and got back in there,” Gilliam said.

The Panthers our rebounded the Tigers 63-44 which led to 17 second chance points for Rochester Century and opportunities at the free throw line.

“I’ll be honest the rebounds killed me tonight,” Gilliam said. “I wish we would have gotten rebounds. You can get a lot of fouls of rebounds if you don’t get it because you end up hacking and flailing. If we could have worked a little harder on the rebounds, and that’s up to me to do to make them better and better rebounders, it would have made a big difference.”

The Panthers were led by Asuncion with 18 points and 11 rebounds, while Pumper had 17 points, 10 of those points came from the free throw line.

Alyssa Sager led the way for Albert Lea with 19 points and nine rebounds and Bryn Woodside had 15 points for the Tigers.

Albert Lea is back in action on Thursday as they travel to take on the Simley Spartans.