‘Tron: Legacy’ is a spectacular movie to see in the theater

Didn’t get enough candy at Christmas? Then check out the eye- and ear-popping sci-fi film “Tron: Legacy.” While its plot and acting performances fall well short of any Oscar nominations, visually, it’s unlike anything I’ve ever seen before. 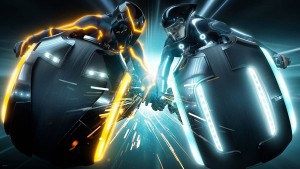 The neon lights that line cityscapes, characters’ clothing and trail the film’s concept motorcycles, called “lightcycles,” make the audience feel like they’re at a laser show or inside a video game. The film’s soundtrack, scored by electronic band Daft Punk, pairs perfectly with the on-screen action and should be nominated for an Academy Award. The film’s plot is far-fetched even for science fiction and won’t leave you asking questions or emotionally attached to any characters, but its visuals and soundtrack are alone worth a trip to the theater. “Tron: Legacy” is currently playing at Cinema 7 in Albert Lea but be prepared to pay an extra $2.25 for 3D glasses. — Andrew Dyrdal