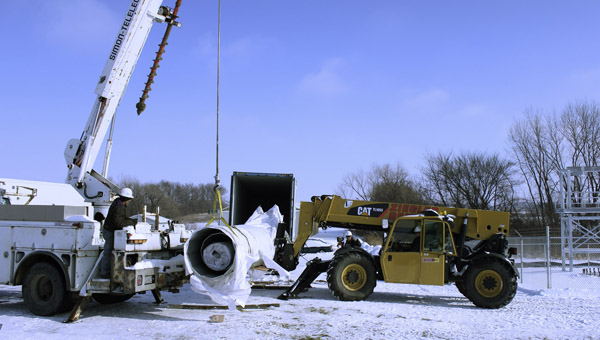 On Monday at the Albert Lea campus of Riverland Community College, workers from Crystal-based Killmer Electric Co. Inc. unload the tower sections for a wind turbine to be erected this week at the campus. The turbine will be behind the chain-link fence on the right. -- Tim Engstrom/Albert Lea Tribune

Riverland staff and students got an unexpected surprise when parts for a wind turbine showed up at Riverland Community College’s Albert Lea campus.

Riverland officials knew the turbine would be coming at some point this week, but it seems no one knew it would come this soon. Riverland officials were shocked when a delivery company called Monday morning saying a semi-truck carrying wind turbine parts would arrive shortly.

The wind turbine will be put up put up by the end of the week, offering students in Riverland’s wind turbine technician program an opportunity to practice on a wind turbine closer to campus.

Steve Vietor had no idea the wind turbine technician program he helped get off the ground at Riverland would be this big. He knew, when he started talking to wind energy representatives in 2003, that wind energy would become a viable job market. The program now has a large waiting list of prospective students who wish to get into a fast-growing job market.

“You realize right away that those wind turbines, as they came into the area that just represented a new (opportunity),” Vietor said. “There are employment opportunities that abound.”

The wind turbine technician program kicked off in 2009, thanks to years of planning, coordination between several Riverland departments, and state funding for the program secured by state Sen. Dan Sparks and state Rep. Jeanne Poppe.

Students in the program are excited for the opportunity to work on a turbine closer to the campus. Previously, Vietor would take students to a wind farm in the area whenever there were scheduled training days the companies would offer. Now the students will be able to run simulations on an actual wind turbine, which will generate power for the Albert Lea campus, in circumstances similar to what they’d experience in the field.

“You’ve also got the danger aspect of being harnessed in 300 feet up,” said Shaun Eppler, a second-year wind turbine technician student from Austin.

Safety is a large concern in the wind turbine technician program, according to Bob Bender, an instructor in the program. Students must learn how to properly harness themselves, climb up the wind turbine tower and move about in a safe manner.

“The variety, the things we try to hit really get students a good start out in the field,” Bender said.