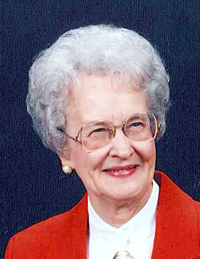 Senora Olina Moen was born May 10, 1920, the daughter of Alfred G. and Clara (Martinson) Thompson. She was baptized and confirmed at Immanuel Lutheran Church in Scarville, Iowa, and grew up on a farm east of Kiester. She graduated from Scarville High School in 1938.

On June 30, 1939, she was united in marriage to Orville K. Moen at the parsonage in Scarville. Together, they farmed for many years. In 1950 they moved to Lake Mills, Iowa, where they spent the rest of their married life.

In July of 2008, Senora moved to Boyceville, Wis., and lived with her daughter, Mary, so she could be close to her family. She enjoyed spending time with her grandchildren and great-grandchildren. For the last year, Senora resided at the Glenhaven Nursing Home in Glenwood City, Wis.

Senora was active at Salem Lutheran Church where she was secretary and president of the Ladies Aid, Sunday school teacher, Luther League advisor, served on the church counsil, sang in the choir, was a quilter, worked on The Informant and faithfully attended Circle and WELCA.

In the community, she worked with Heart and Cancer, the scouting program and Welcome Wagon hostess. It was an honor when she and Orville were named grand marshalls for the July Jubilee for their community efforts. After working 20 years at the Lake Mills Telephone Company, she stayed working part-time for several business places.

Her hobbies have been scrap booking, albums, golfing, crocheting, playing cards and having coffee with friends and family. Grandchildren and great-grandchildren have been very special in her life. She always loved her family.

Senora was preceded in death by her parents; her husband, Orville in 1993; her daughter, Marcia Kay; her grandson, Michael Blaser; and brothers: Marvin, Roger and Arvid.