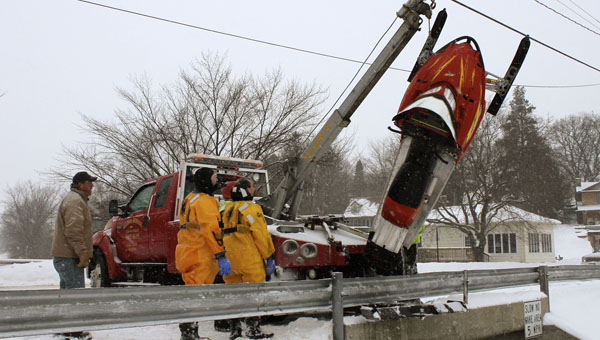 As Albert Lea Fire Department cold-water divers look on, tow truck from Allen's Tow 'N Travel lifts an Arctic Cat snowmobile Monday morning above the guard rail on the small bridge over the Fountain Lake channel to Dane Bay. The divers had attached the hook. The driver was careful not to hit the overhead lines. -- Tim Engstrom/Albert Lea Tribune

Albert Lean Dean Slater and his snowmobile fell through the ice around 9:30 p.m. Sunday. 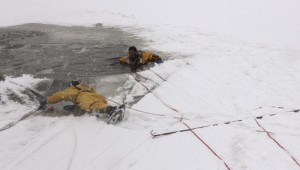 “I have learned my lesson: Never sled alone,” he said. “I am lucky I got out of the water.”

He said he was doing a quick check to prepare the sled for use by his daughter and her boyfriend. Slater parked it on the ice of Fountain Lake about 50 feet north of where Dane Bay empties under a bridge on Lakeview Boulevard. He checked the thickness of the ice in some holes about 10 feet from his 2003 Arctic Cat F7. They were about two-feet thick. When he returned and sat on the snowmobile, the ice suddenly broke. In went his machine, and Slater jumped off the back end for the edge of the ice. He tore a glove but caught a grip and threw his leg up. He got onto the surface and crawled on his belly to the edge, then ran home. Slater’s home is on Pleasant Avenue and faces Dane Bay. 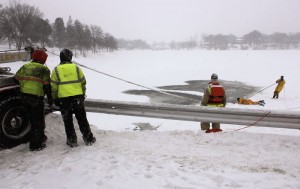 Albert Lea Fire Department cold-water divers on Monday prepare tow lines for a snowmobile they hooked moments earlier. The snowmobile was dragged to the shore in the water before it was hoisted upward. -- Tim Engstrom/Albert Lea Tribune

He returned with a tow truck driver and could see the back edge of the snowmobile. With a tow hook in hand, he stepped onto the ice and fell through, hurting his knee.

On Monday, as firefighters in cold-water gear attached a hook to the snowmobile, Slater walked on the sidewalk with a limp. He said he hadn’t slept since falling through.

He said he is experienced with water and grass racing with his snowmobile, noting it even has a paddle. It doesn’t do much good, he said, when the machine plops straight down.

Slater said people should stay off the ice, even the edge. The thickness of ice even 10 feet away can be different. He said two weeks ago it was “solid as a rock.” Heavy snow insulates the lake and weakens the ice. Plus, the current under the bridge thins the ice.

Albert Lea Fire Department Capt. Scott A. Hanna said as they were hooking up the snowmobile the firefighters witnessed a pickup drive on the ice. They wondered if they would need to perform another rescue.

“We have spots all over Albert Lea and Fountain Lake that have bad ice on them,” he said.

The firefighters performed ice-rescue training earlier this month. He said they discovered the ice had become weaker as the snow covered it.

“All this extra snow on the surface, the ice isn’t getting as thick as it has, and it hasn’t retained its strength. And we had those warmer days; we’ve got warm water underneath of it.”

Hanna said the ice is dangerous and urged people to stay off.