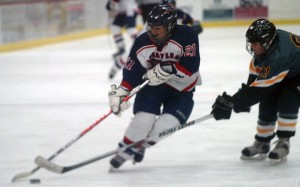 Tigers forward Sophia Jepson works to get the puck past a Spartan defender on Thursday.

“They’re a big, strong team that shoots well,” Albert Lea coach Paul Willett said. “They didn’t give us any rebounding opportunities and they used their size and strength to push us out of the way.”

The Spartans led 3-0 lead in the third, when Sophia Jepson scored a goal for the Tigers to cut the Rochester Mayo lead down to 3-1.

After that, the Spartans went on to score the next three goals and put the game out of reach.

Sydney Conley took the loss as she had 15 saves on 21 shots, while Rebecca Graham earned the win for the Spartans with 22 saves on 23 shots.

The Tigers will be back in action next Thursday as they travel to Mankato to take on Mankato East/Loyola.