They should’ve played the game

“This is football; football’s played in bad weather. I, for one, was looking forward to sitting in the stands throughout the snow and seeing an old-time football game.” 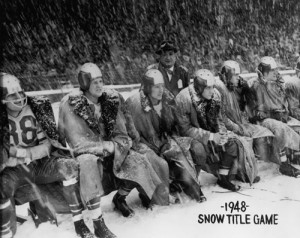 Many Minnesota Vikings fans missed out on watching football Sunday evening. The NFL postponed the game in Philadelphia against the Eagles because of an expected blizzard. However, the storm didn’t end up packing much of a wallop. Instead of the forecast 18 inches, Philly got 7 or 8.

Some of the best NFL games were in the snow. The Ice Bowl. The “tuck rule” game. The “snow plow” game. The 1993 Thanksgiving game in Dallas. The 2007 Bills-Browns snow bowl. The 1985 Packers-Buccaneers snow bowl. Numerous Metropolitan Stadium games. And the legendary 1948 NFL Championship game between the Chicago Cardinals and the Philadelphia Eagles, where fans who brought a shovel got in free.

That game was played in Philadelphia.

“It’s an absolute joke. I was looking forward to this. It would have been a real experience. This is what football is all about. We’re becoming a nation of wussies.”

On Sunday, many players on Twitter indicated they wished to play, too. Football in snow is just plain fun for players and fans alike.

Surely the NFL and NBC didn’t want to postpone the nationally broadcast game. They and Philadelphia leaders had the concerns of the fans at heart. But the subways in Philly were working and people would have made it to the game, as Rendell pointed out.

Maybe it is a good lesson for all. The show must go on.

Business community will advocate for jobs