Honorees or their representatives, receiving plaques at the event included the following: 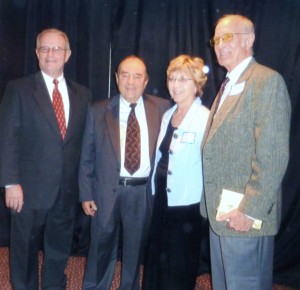 Established standards for honorees to qualify include the following:

The three ALHS honored alumni for the year 2010, who were present at the ceremony, gave brief orations of their high school experience, and important milestones in their careers. These men addressed the senior class at an assembly Nov. 12 in a capsule question/answer session at ALHS, which produced multiple topic queries by interested students in the exchange of ideas.

Teachers mentioned by recipients as influential during their high school career included Earl Jacobsen who taught industrial arts, and Byron Spear, a math instructor. Both Jacobsen and Spear were present on Nov. 12 at the high school session with students.

Plaques signifying each participant are displayed on the Wall of Honor at ALHS, along with other award winners from previous years. The board of the ALHS Educational Foundation is responsible for the alumni recognition each year for the Pathways to Success program begun in the year 2007.

The biographies of the recipients were published in the Tribune on Sunday, Nov. 28.