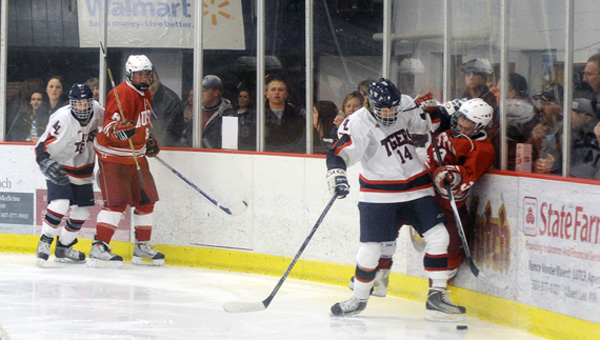 Levi Hacker (14) checks an Austin player into the boards Tuesday during the third period at City Arena. -- Andrew Dyrdal

“This was a breather,” Tigers head coach Roy Nystrom said, of the blowout win. 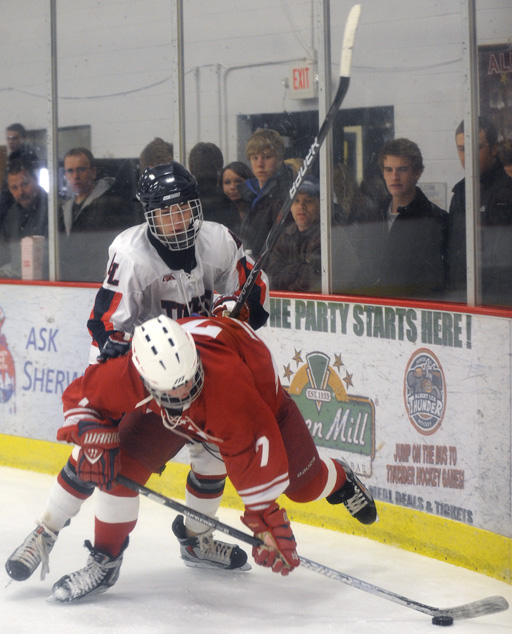 Albert Lea’s Luke Cheever (17) knocks down Austin’s Pat Wagner (7) Tuesday as both players scramble for the puck at City Arena. Cheever scored one of the Tigers’ many goals in a the 9-0 Big Nine Conference win. -- Andrew Dyrdal

Tuesday’s lopsided win over the rival Packers (1-5, 1-3) gave the Tigers a chance to relax, have fun and rest before a weekend holiday tournament and brutal stretch of games to enter the new year.

“A lot of guys got experience in the victory,” Nystrom said. “A lot of sophomores played tonight.”

Nystrom played four lines and six different defenseman — a total of just three seniors thanks to 6-0 advantage after the first period.

Nate Stadheim put the Tigers on the board four minutes and 12 seconds into the game. Brady Falk added a second goal just over a minute later before Carlson put the Tigers ahead 3-0 with a power play goal 9:48 into the first.

Carlson’s second goal was the most impressive.

With Luke Cheever and Dillon Stolt both in the penalty box, Carlson nixed the Packers’ 5-to-3 advantage and scored easily on a breakaway.

Cheever added another short-handed goal 20 seconds after being released from the box and Brady Falk netted the Tigers’ sixth goal just before the horn sounded.

The Tigers scored on six of 17 first periods shots on goal and held the Packers to just seven.

Carlson scored two short-handed goals in the second period to bring his season total to 12, and Adam Herbst added the Tigers’ ninth and final goal from just inside the blue line 13:30 into the third period.