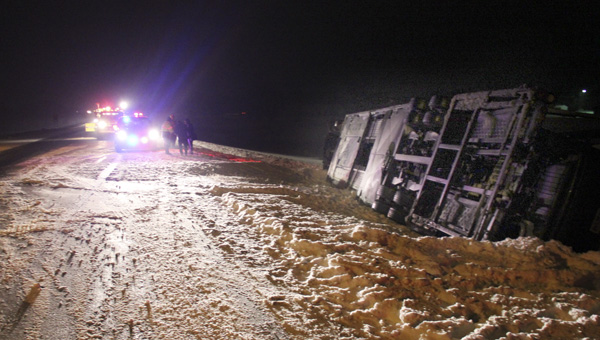 A semi hauling automobiles overturned into the ditch along Interstate 35 on Monday south of the Minnesota Welcome Center. There were many semis and cars in ditches just north of the Iowa border.

The weather outside was frightful on Monday as crashes, closings and cancellations seemed to be the theme of the day, thanks to another winter snowstorm that blew through the area.

In the LaCrosse district of the National Weather Service, Austin reported 5 1/2 inches. La Crescent had 5 inches. Winona had 3 inches. Waukon, Iowa, had 7 inches.

The roads in the Albert Lea area were a mess, as fresh snow fell on already packed snow. Freezing rain formed ice, causing even slicker surfaces.

Around 1:15 p.m. Monday, an Albert Lea school bus carrying children slid into a ditch 2 1/2 miles north of Albert Lea on Freeborn County Road 20, also called the Bath Road. No children were injured and no damages were reported. A short bus was on the scene to transport the children home safely within 10 minutes of the incident.

It was reported that slick conditions and limited visibility contributed to the incident.

About a half-hour later, at 1:45 p.m., Interstate 35 south was closed near Exit 5, between Freeborn County Road 13 and U.S. Highway 65, after a crash involving two semis stopped traffic. The roadway was opened about an hour later, but Minnesota Department of Transportation officials still cautioned drivers of slippery conditions due to heavy snow, icy patches and limited visibility.

Earlier in the day, at about 10:30 a.m., five cars were reported in the ditch along I-35 a mile north of the Iowa border. A semi also reportedly jackknifed on I-90 near the County 12 bridge three miles east of Alden at 11:28 a.m. Freeborn County sheriff’s deputies assisted State Patrol troopers with the semi.

Freeborn County Sheriff Mark Harig guessed that more than a dozen crashes had been reported by 11:30 a.m., mostly cars in ditches along the interstate.

United South Central schools in Wells closed at 10:30 a.m. and New Richland-Hartland-Ellendale-Geneva schools closed at 10:45 a.m. All after-school activities were cancelled at both school, as well.

In addition, the Albert Lea Parks & Rec Advisory Board meeting scheduled for Monday evening was cancelled, along with other meetings and sports contests.

Snow followed by freezing drizzle was predicted for Monday evening. Little or no ice accumulation was expected and new snow accumulation of less than one inch was possible.

While there was no snow in the forecast for Tuesday — ironically, the first day of astronomical winter — Thursday and Friday call for a chance of snow and flurries are possible on Christmas Day, with the heaviest snow to fall on southwestern Minnesota.