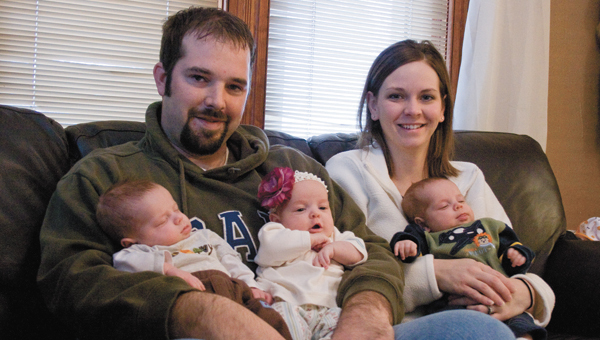 Eric and Heather Hendrickson became the proud parents of triplets in November. The triplets were born in Rochester and were able to come home after only eight days. -- Sarah Stultz/Albert Lea Tribune

That’s how Eric and Heather Hendrickson said they felt when doctors told them last year that they were having triplets.

As if it’s not enough to prepare for the birth of one child, the first-time parents started making the necessary preparations a little at a time — times three.

At first, the couple attended appointments every two weeks with doctors, but then toward the end those increased to once a week.

At 20 weeks until the end, Heather was advised to stay home from work at the Owatonna Clinic and to take it easy for her own health and the health of the babies.

Delivered Cesarean section in Rochester, the babies were born in just a matter of a few minutes.

First came Wyatt Edward at 4 pounds 5 ounces. Next, in the same minute, came Eli James at 5 pounds 4 ounces. The two boys are identical.

Aubrey Rae Hendrickson looks around the room while sitting in her father’s lap on Monday. -- Sarah Stultz/Albert Lea Tribune

The next minute, little Aubrey Rae was delivered, at 4 pounds 13 ounces.

Heather said doctors all along had advised her and her husband to plan on having the babies stay in the hospital for 30 days, but after only eight days, the family was allowed to go home.

The first night at home came with its challenges.

“The reality had to set in that we have three babies at home that are premature and you have to take care of them now,” Heather said.

Though they still have their challenges, the couple has begun to adapt to life as parents of triplets. Heather talks to other families with multiples to learn tips and hear from their experiences, and family and friends have helped out a lot.

Now about 2 months old, the babies are starting to smile and coo, the Hendricksons said.

And they’re stretching out their sleeping patterns to four or five hours, if they’re lucky, Heather said.

They call little Wyatt “Squeaks” because of the sounds he makes.

Aubrey is a little angel, who loves sleeping.

And Eli, who they call “Big Boy,” loves to jump.

“Thank you to family and friends for all the loving support and prayers,” Heather said. “We’ve had lots of prayers.”

Heather said she plans to go back to work in two weeks, after which family will take care of the babies during the day.

Right now the couple, who have been married for about a year and a half, plan to focus on their children. They don’t plan on having any additional children — at least not in the near future.