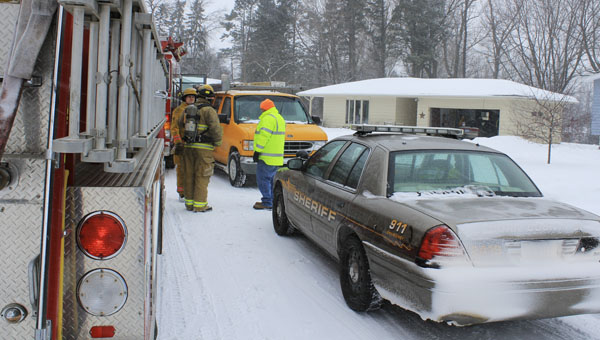 Firefighters speak with an electrician outside the home at 1614 Elm St. in the Stables neighborhood northwest of Albert Lea. The Manchester Township Fire Department and the Albert Lea Fire Department responded.

A house in the Stables neighborhood northwest of the Albert Lea city limits was damaged by fire early this morning, after fire broke out in the attic of the house.

Fire departments from Manchester Township, Albert Lea Township and the city of Albert Lea responded to the fire.

Firefighters responded to the same house, of Terry and Dorothy Vandersnick at 1614 Elm St., just before noon Monday for smoldering in the attic insulation.

At that time, Manchester Fire Department Chief Rich Wichmann said the smoldering was caused by a light fixture in the dining room ceiling that shorted out. There was no blaze at that time, and firefighters removed hot insulation and a charred rafter from the attic.

“It was just one of those things that happened. There wasn’t anything anybody could’ve done to prevent it,” Wichmann said.

He noted that the family went back Monday evening to check out the attic rafters to make sure the smoldering hadn’t started up again and left when they found no sign of fire. The family stayed with relatives for the night.

A neighbor woke up and saw flames just after 4 a.m. today and called 911.

Wichmann said there was “extensive” damage to the house, as the fire spread over the entire attic and into the entryway of the house. He did not state whether it was a total loss.

The fire chief said the fire might have been started from a hot ember, but he did not want to speculate at this time.

Firefighters were still assessing the house for hot spots at 8 a.m. today.

One injured in freeway rollover