NEWRY TOWNSHIP — Freeborn County Sheriff’s Office detectives and authorities with the Minnesota Bureau of Criminal Apprehension are investigating the deaths of two people in Newry Township.

According to a Freeborn County Sheriff’s Office news release sent out Tuesday evening, sheriff’s deputies were dispatched at 10:30 a.m. Tuesday to 88793 320th St. of rural Blooming Prairie in northeastern Freeborn County to check on the welfare of a person who did not show up for work for two days in a row. 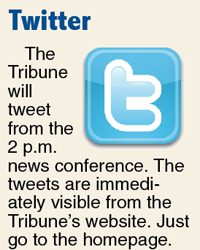 When they arrived, and with the assistance of a family member, authorities entered the house and found the bodies of two people in different and nonadjacent locations within the house.

The on-scene investigation provided no indication as to the manner or cause of death, according to the release.

Autopsies of each person are pending with the Ramsey County Medical Examiner’s Office.

The case remains under investigation by the Freeborn County Sheriff’s Office in cooperation with the Minnesota Bureau of Criminal Apprehension.

Victim information will be released after the completion of autopsies, additional investigation and family notification, according to the release.

The house is on Freeborn County Road 35.

Freeborn County Sheriff Bob Kindler said a news conference is scheduled for 2 p.m. today. A story will be posted online as soon as possible.