Birds can disappear for various reasons

“Everything is nearly copacetic. I’m still trying to keep up with yesterday because I used to eat too much.”

“I still eat too much but I used to, too. I think the lady at the post office hates me.”

“I needed to mail a package to my brother Chumley’s boy in St. Louis. It seemed expensive to send the package to Missouri. I asked her if it would be any cheaper if I drove it to Iowa and mailed it from there. Shorter distance. I think she’d have laughed if she hadn’t been so mad at me. I climbed one of those confound wind turbines. Worrying Elmer and I decided to have a contest. We took turns throwing our watches off the top, scrambling down and trying to catch the watches before they hit the ground. Worrying Elmer threw his watch, took three steps and heard his watch crash. I tossed my Timex off the tower, climbed down slowly, drove to the Grab N Gulp for a cup of coffee, had a sweet roll, drove back to the turbine and caught my watch.”

“That’s impossible. How could you do that?” I say.

Looking out the window

I write for a living. That means I need to spend time staring out the window.

The house sparrows hit the bird feeders. A house sparrow is like that fussy kid in the highchair. The one more interested in making a mess than eating. Sparrows fight over the seed they don’t eat. They toss the seeds they are unable to consume to the ground. They throw their food here and there. 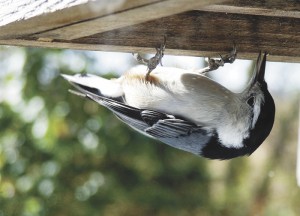 Suddenly, the blue jays had a collective cow. They kicked up a fuss of epic proportions. Then they disappeared, as did all the other birds at the feeders. I saw a nuthatch pressed motionless against the bark of a tree, involved in a serious game of freeze tag.

An accipiter (either a Cooper’s or a sharp-shinned hawk) was bird hunting in my yard. The yard was quiet with no perceptible movement of any kind. It was like the night before Christmas. Not a creature was stirring.

Then I saw a chickadee in a lilac. Its bill moved up, down and around, as though the tiny bird was attempting to look in all directions at once. It pointed its bill as I do my nose in order to use my bifocals. While it was doing that, the chickadee sang its name, “Chick-a-dee-dee-dee-dee-dee-dee-dee-dee-dee.” The number of “dees” indicated the threat perceived by the minute bundle of feathers. I didn’t see the hawk, but the chickadee told me that it was there.

I watched for 10 minutes as the chickadee kept an eagle eye out while constantly sounding an alarm. The “dees” were countless. Then the chickadee flew to the feeder and grabbed a sunflower seed. My mother had a short memory for bad things. She claimed it was the only way to be. Maybe the chickadee had the same kind of memory.

After the chickadee had made a few successful trips to the feeder, other birds returned. Juncos, goldfinches, tree sparrows, various species of woodpeckers, blue jays, house sparrows and an unfrozen nuthatch.

“Where are all the birds? My feeders have been abandoned.” There are a number of possible reasons for the lack of birds. Normal movements of birds can change populations in specific areas. These movements could be seasonal or result from other causes. Habitat changes affect bird numbers. If there has been a major change in your neighborhood — buildings erected, trees cut down, water source eliminated, a neighbor with a gigantic neon arrow pointing to his feeders, etc. — it could result in fewer birds. The birds’ natural food supplies — such as acorns, pinecones, berries, seeds and insects — tend to fluctuate, causing birds to shift ranges in order to take advantage of food abundance or to avoid food hortages. The variability of weather can cause birds to shift ranges, especially during the winter. This is not unlike Minnesotans shifting ranges and becoming winter Texans. Perhaps a predator moved into your neighborhood. A cat or an accipiter could frighten the birds away. Predators far surpass David Copperfield in making things vanish. The birds should return once the predator has moved on.

“Why do so many crows come into the city during the winter?” Crows gather in flocks at night for safety. Great horned owls prey upon crows and are nocturnal hunters. There is safety in numbers as more eyes make predator detection easier. Crows like perches with unobstructed views and good lighting where they are able to watch for predators. Crows have a growing tolerance for humans as they have discovered that city-dwelling humans aren’t true predators. There is a heat island effect in cities that make for slightly warmer nights. There is food available in cites — crusty hot dog buns, stale french fries, garbage, etc.

Minnesota has never had an official snowfall during the month of July.

In the comic books, Gus Goose was sometimes referred to as Donald Duck’s second cousin. An ornithological miracle.

A new species of snub-nosed monkey discovered in a remote forest in Myanmar has such an upturned nose that it causes the monkey to sneeze when it rains. Look for it to be featured in TV commercial for an allergy reliever.

“Happy is the man who has learned to hold the things of this world with a loose hand.” — Warren Wiersbe.