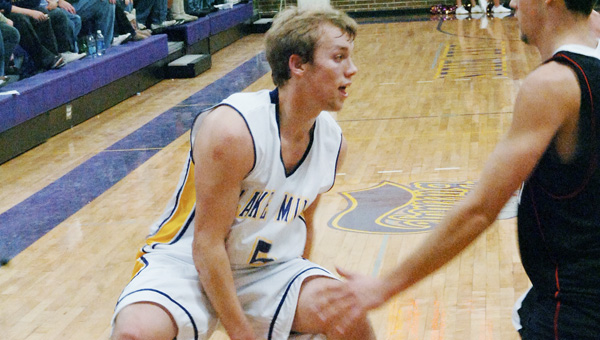 LAKE MILLS, Iowa — The top spot in the North Iowa Conference was on the line Tuesday as the Lake Mills Bulldogs boys’ basketball team hosted the Garner-Hayfield Cardinals in Lake Mills.

The Bulldogs (12-2 overall, 7-2 North Iowa) overcame an early 12-point deficit and pulled away in the second half, defeating Garner-Hayfield 57-40.

“This was a great win for our kids,” Bulldogs head coach Kyle Menke said. “Garner-Hayfield is an excellent team and an excellent program. To be able to beat them twice in the regular season says a lot about our kids.”

While the Bulldogs got the win, things didn’t exactly go their way early in the game.

The Bulldogs held a 5-0 lead in the first quarter but it didn’t last long.

The Cardinals scored 17 straight points getting shots to fall from all over the court to take a 17-5 lead early in the second quarter.

“We were just missing shot,” Menke said of the Cardinals’ 17-0 run. “We were getting pretty good looks but it didn’t help that Marcus (Gaskill) got two fouls early on and it limited our inside game. We had a lot of good looks at the basket that weren’t going down.”

That wouldn’t last long as the Bulldogs offense kicked into gear and immediately answered the Garner-Hayfield run with a 12-0 run of their own, climbing all the way back and tie the game at 21-21.

Garner-Hayfield’s Michael Brown hit a layup to give the Cardinals a 23-21 lead going into halftime.

After halftime, the Bulldogs took a 28-26 lead with 4 minutes and 45 seconds left in the third quarter and never looked back.

The Bulldogs went on a 12-5 run that included a 3-pointer from Tyler Rice before the buzzer sounded to end the third quarter as the Bulldogs led 40-31 going into the fourth.

“The end of the third quarter was big,” Menke said. “We got the last eight points in the third. Zabel got a layup and then we got a big 3-pointer from Brandt in the corner before Rice hit the buzzer beater from the top of the key. That was the key stretch of the game. We went from a real tight game to having a real nice lead after the third quarter.”

In the fourth quarter, the Bulldogs got the ball to their big man Marcus Gaskill early.

Gaskill scored six quick points for the Bulldogs to push the Lake Mills lead up to 46-35.

The Cardinals tried to get back in the game late as Michael Brown scored a layup and got fouled for athree-point play to cut the lead to eight.

The Bulldogs then closed the door on Garner-Hayfield as they went on an 11-2 run that secured a 57-40 win for Lake Mills.

Brandt also finished with four 3-pointer, while Rice had three.

Josh Thompson and Brown both had 10 points for Garner-Hayfield.

With the win, the Bulldogs sit atop of the North Iowa Conference with a 7-2 record.

Menke said he hopes being on top of the conference will inspire his team with five conference games left.

“I hope it inspires them,” Menke said. “At this point we’re 7-2 and have five conference games left to play. We have an opportunity to control our destiny.”

The Bulldogs hit the court again on Friday as they travel to Osage to take on the Greendevils.