Teens injured on I-35 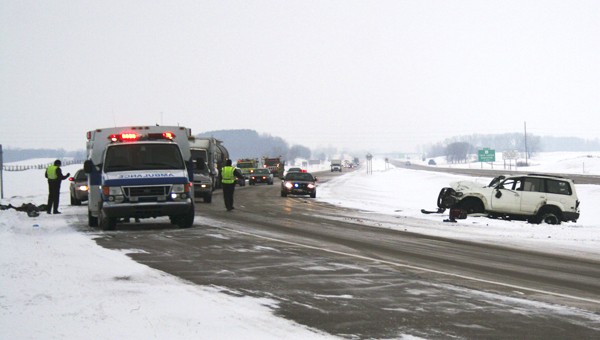 The Albert Lea Medical Center ambulance crew was on the scene at a one vehicle rollover south of Albert Lea Monday morning. -- Michelle Haacke/Albert Lea Tribune

Icy road conditions were likely the cause of a one-car crash, leaving two teenagers with serious injuries, near Albert Lea Monday morning.

A rollover was reported on Interstate 35 northbound, south of the Glenville exit near mile marker three, just before 9 a.m. Monday.

According to a report by the Minnesota State Patrol, Alexander S. Joy, 18, of Stillwater, was driving a white 1995 Toyota Land Cruiser when he lost control of the vehicle. The Land Cruiser reportedly rolled and landed upright, throwing Joy from the vehicle.

A passenger, Jenna M. Albert, 18, of Iowa, was also in the sport-utility vehicle at the time of the crash.

By 9:30 a.m., the Glenville Fire Department had slowed traffic in the southbound lane as law enforcement officials from the Minnesota State Patrol and Freeborn County Sheriff’s Office gauged the scene.

Joy and Albert were transported to Albert Lea Medical Center by ambulance and both were listed in critical condition on Monday morning. The Tribune called for an update on their conditions this morning and was waiting for a response at press time.

The road conditions were reported as icy and likely the cause of the rollover. Traffic was moving slower than usual in both, the northbound and southbound lanes, on I-35 Monday morning.

Slick roads plagued Freeborn County as the area was part of a hazardous weather outlook issued by the National Weather Service early Monday morning. Albert Lea received about an inch of new snow before the morning commute.

Albert Lea schools had two-hour delays due to slick roadways and drifting snow. Snow and freezing drizzle were likely throughout the morning, expected to turn into all snow in the afternoon.

Winds were predicted to pick up Monday evening with north winds up to 17 mph and gusts as high as 25 mph possible, causing wind chill values as low as -11 degrees. Drivers were being cautioned of limited visibilities due to blowing snow later on as winds picked up.

Patchy snow is in the forecast for Tuesday and Thursday, with another Arctic cold front moving through the area later this week, bringing with it dangerous wind chills.